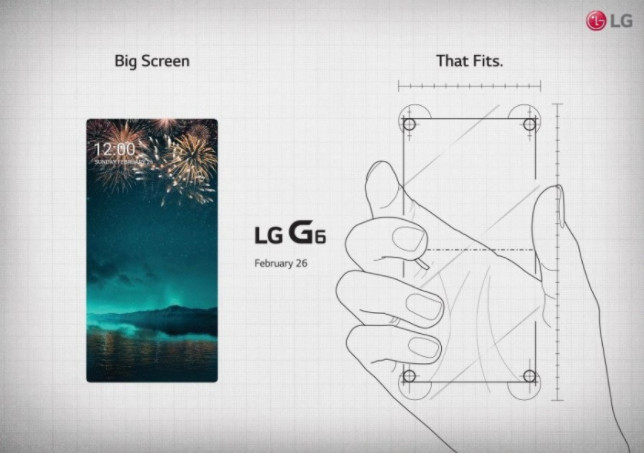 The time has almost come for LG to debut its next handset, the G6. The firm has been teasing the handset for a little over a month and while we know that it'll offer a large 5.7-inch QHD+ display dubbed 'Full Vision', it appears that despite its large screen, the handset could comfortably sit in one's hand.

What you are seeing above is a new teaser image being sent to press for LG's Mobile World Congress event. Oddly enough, there isn't much to be surprised about as we have already seen the handset in the flesh, due to a leak late last month. If that wasn't enough, we also caught a glimpse of the alleged rear in a high gloss finish and a more traditional brushed metal look.

LG debuted the G5 last year to an excited crowd at MWC, but once the handset actually arrived into the hands of reviewers, many panned the device for its weak construction, design, and lack of useful modular components. Not wanting to make the same mistake again, LG confirmed that it would not be continuing the modular aspect of the device with the G6. The firm will hold its G6 event at Mobile World Congress on February 26, with the handset slated to arrive in March in Korea and April in the US.