Way back in October 2013, Nokia announced its first Windows tablet, the Lumia 2520. It was one of only a handful of devices to have been released with Windows RT, but nonetheless, it impressed us when we reviewed it at the beginning of this year. 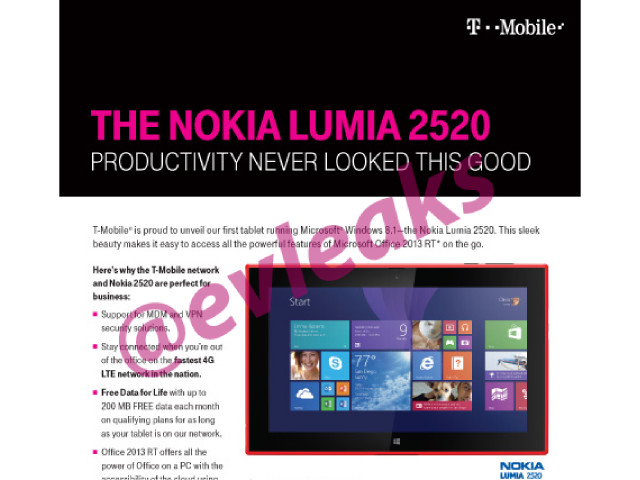 Now, eight and a half months after its launch, it seems that the tablet may finally be making its way to T-Mobile, as @evleaks revealed today. The image appears 'real' enough - the fonts and colours are accurate, and it's not written in broken English or anything (although it does refer to the "Nokia 2520", rather than "Lumia 2520", at one point) - but we can't confirm or deny its authenticity.

There is no further information available yet regarding pricing or availability of the 4G tablet on T-Mobile, although given the continuing uncertainty surrounding the future of the Lumia and Surface tablet range, it seems like an odd time to be launching a device that will soon be a year old. 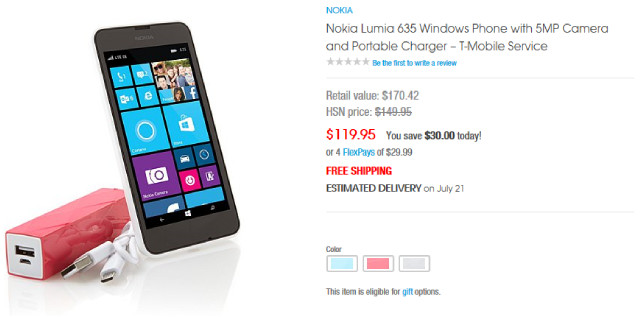 But if the 2520 is a bit too big for your needs, perhaps the Lumia 635 will satisfy you. T-Mobile announced earlier this week that the new entry-level 4G Windows Phone would go on sale exclusively via the Home Shopping Network on July 5, but as WMPowerUser reports, it is already available to buy now.

HSN is offering a special deal on the device too; for $119.95, you'll get the handset off-contract along with a free car charging unit and a portable charger. This portable charger contains its own 2200mAh battery, which will be more than enough to fully recharge the phone's 1830mAh battery on the go.

The Lumia 635 will be available on MetroPCS from July 18, with special "promotional pricing" at launch of just $99 off-contract for the device.