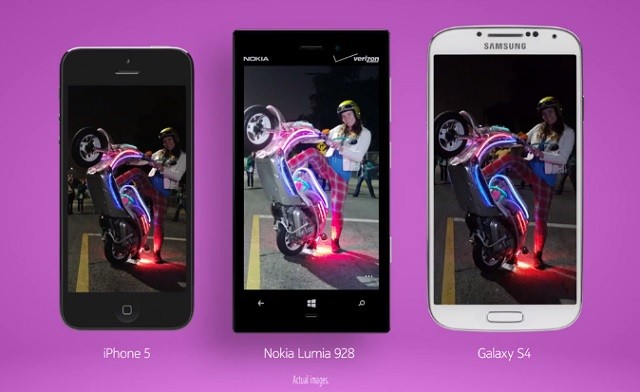 A new ad for the Nokia Lumia 928 has appeared on the Windows Phone YouTube channel, showing off the low-light capabilities of the 8.7-megapixel 'PureView' rear camera with optical image stabilization. The ad shows how the camera can take stunning photos and video in low light conditions, before calling out both Apple and Samsung by saying it's "better than iPhone" and "better than Galaxy" while showing a comparison image.

The Lumia 928 clearly beats both the iPhone 5 and Galaxy S4 through having a brighter, more clear image, with Nokia even saying that these are "actual images" in the fine print. Interestingly Nokia didn't want to try its luck against the HTC One, which also has optical image stabilization and extra-large "Ultrapixels" for assisting in low-light photography, but nevertheless it's a decent campaign that pits the Lumia 928's advantage against some major players in today's smartphone market.

You can purchase the Nokia Lumia 928 right now from Verizon for $99 subsidized on a two-year contract, while the very similar Nokia Lumia 925 is coming to other territories in June. The latest ad for the Lumia 928 can be seen below.