Although Nokia announced its new flagship Windows Phone 8 device exactly one month ago, questions over when it will be available and how much it will cost remain unanswered. Even yesterday, as AT&T announced that it would exclusively offer the Lumia 920 in the US, it stopped short of revealing any information on pricing - although it did commit to launching the device "in November".

In other parts of the world, things remain even more ambiguous, though one would hope that - as we get closer to Windows Phone 8's official launch - device manufacturers, operators and retailers will become a bit less tight-lipped over their launch plans. Perhaps we're seeing some hints of that already, as Europe's largest independent phone retailer, Phone House (part of the Carphone Warehouse Group), may have given a big clue as to the big Lumia's availability on this side of the Atlantic. 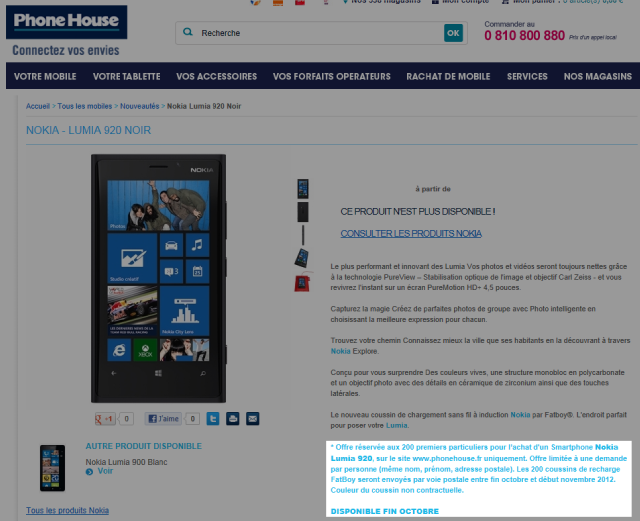 On a 'coming soon' page showcasing the black Lumia 920, the retailer states that the device will be available at the end of October ("disponible fin Octobre"). If you're not quite convinced, or think that might just be an error, the text above it in blue refers to a special promotion, offering a free FatBoy wireless charger to the first 200 customers who buy a Lumia 920 on PhoneHouse.fr, which states:

...which appears to affirm the idea that the device will indeed arrive at the end of October. While the Lumia 920 is not set to launch in the US until early November, it's certainly possible that the handset could go on sale first in Europe; Microsoft has confirmed that Windows Phone 8 will officially launch on 29 October, so a launch of the new Lumia at the same time is feasible.

A launch at the end of October would also coincide with the launch date of EE's 4G service in the UK; EE has promised that it will offer the Lumia 920 (and its slightly smaller sibling, the Lumia 820) on its 4G service, which will launch in ten British cities on 30 October.

Of course, nothing's official until it's official, and only time will tell if any of this proves to be correct - but at least there's not too much longer to wait until all is finally revealed.