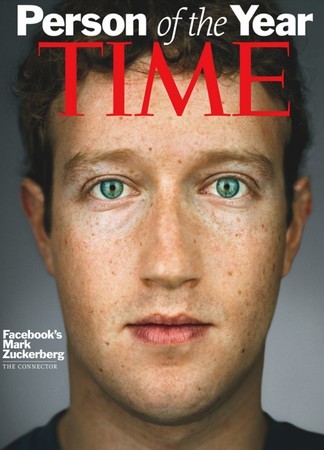 Facebook has changed the way we communicate and has enhanced our ability to share embarrassing photos. Facebook has been nothing short of a major success for not only connecting people around from around the world, but also being a profitable business too. Because Zuckerberg was able to do this, and has managed to run MySpace into the ground, he has been named Time's "Person of the Year".

While the award offers little more than an ego boost to Zuckerberg, it does go to show that the young entrepreneur does know what he is doing. It's hard to argue against the fact that Facebook is the de facto standard for social networking and that it has done so without charging its end users a dime.

While the company makes millions (or possibly billions) off of its users, it does provide genuine value for those looking to stay connected. The platform has enriched the Internet experience for many and allows those who are far away to stay connected.

The cover, posted above, shows how young the CEO is, but also that despite his age, he has truly built the company from the ground up. With that, Neowin says congratulations to Mark and let the Photoshopping of the cover begin!