Earlier today, we reported that AMD too, much like Nvidia, is purportedly increasing the power draw of its upcoming Radeon RX 7000 series GPUs. The higher power is to essentially squeeze out as much core clocks out of the chips as possible which will lead to more performance. With such high core frequencies, memory clocks too must be raised and as such, the next-gen GPUs are expected to feature some of the fastest available GDDR memory. 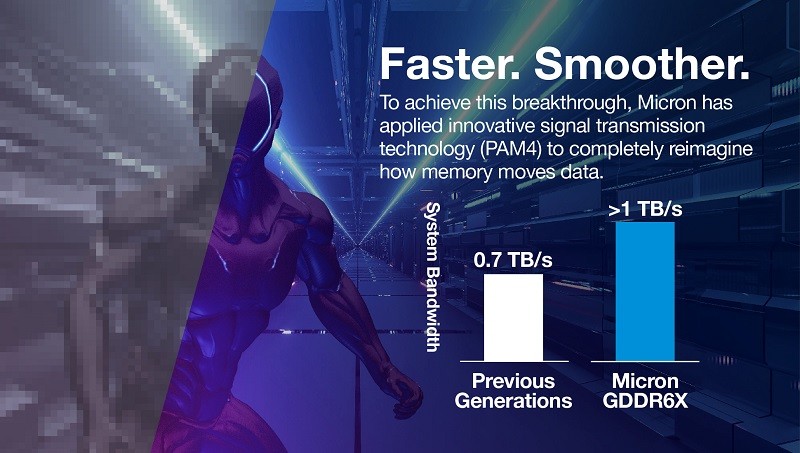 Micron, which is an industry veteran, has begun the production of its fastest GDDR6X memory yet that reaches 24Gbps. The new memory part was spotted by Twitter user and leakster @harukaze5719. The part number for the chip is "MT61K512M32KPA-24:U", where the "24" at the end denotes the speed of the memory and the letter "U" is meant to denote the revision version.

AMD's upcoming RX 7000 series GPUs too could be a potential candidate for this 24Gbps memory. However, Team Red currently does not use Micron's faster GDDR6X DRAM and has stuck to the 16Gbps variant on its RX 6000 series. Meanwhile, it uses Samsung's 18Gbps GDDR6 for the refresh RX 6x50 series.

Intel's Arc desktop cards are unlikely to use such fast memory as the company has already confirmed that it is not going to compete at the high end with big boys AMD and Nvidia, at least not immediately.

Samsung recently announced its own 24Gbps GDDR6 memory too, which is always a good thing for GPU-makers as having a single manufacturer can often lead to shortages.