News about Nokia's first Windows Phone 8 devices just keeps on leaking. Less than an hour after new images emerged of the two new handsets, more details have now apparently been revealed about the Lumia 820, which will slot in below the Lumia 920 flagship in Nokia's new range of Windows Phones.

Citing multiple "sources familiar with the company's Windows Phone plans", The Verge reports that the Lumia 820 will include wireless charging; earlier, we reported that this feature is also expected to be included on the slightly larger Lumia 920. However, it is claimed that users will have to purchase a separate cover in order to enable the wireless charging feature on the Lumia 820. 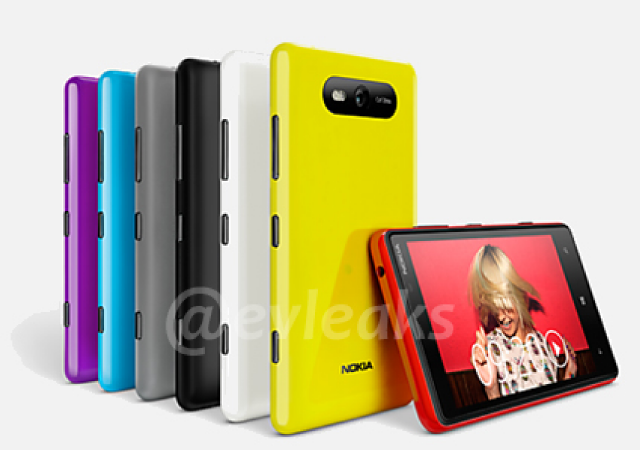 Storage is another area in which the 820 will differ from its bigger brother. Whereas the Lumia 920 is expected to include 32GB of on-board storage, the 820 is said to include just 8GB, although it will include a microSD card slot so that users can expand their local storage further. The 820 will also feature removable rear covers - so when you realise what a terrible mistake it was to go for that canary yellow option, you can switch to a more subdued choice at a later date.

Interestingly, the 1.5GHz dual-core processor and 1GB of RAM that the 820 will reportedly include are identical to the specs predicted for its larger sibling. It is claimed that the 820's camera "will be similar to its Lumia 920 counterpart" although whether or not it too will be PureView-branded remains uncertain.

The broadly similar specs and physical size of the two devices doesn't appear to have left much of a gap between them, and it will certainly be interesting to see how Nokia chooses to separate the two handsets in its marketing. Pricing will surely be a significant factor - but we'll have to wait until Wednesday for more on that.

But then again, given the frequency of all these leaks, we may yet find out before then.

Source: The Verge | Image via @evleaks