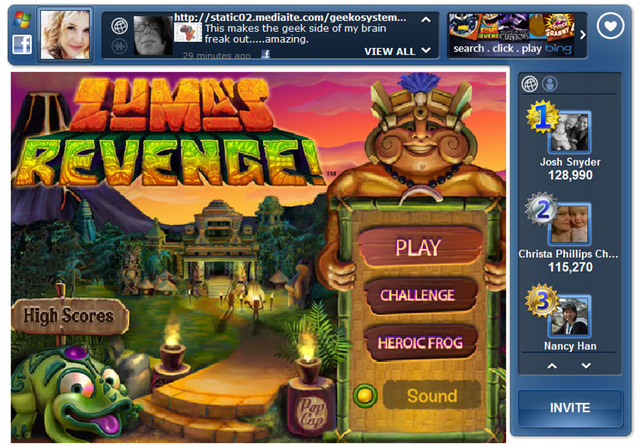 Microsoft announced a new gaming hub that connects their three major social gaming portals. They are calling it the Microsoft Game Hub, and it is a combination of MSN Games, Bing Games and Windows Live Messenger. The new hub will allow anyone that uses any of the old portals to play any of the available games and see their friends status online.

With today’s announcements, we’ve made it easier to find and play the games you love while connecting to the people who matter most to you. We’re driving that experience across multiple platforms so millions of players can share their experiences with their social circles.

With the Game Hub, MSN Games has been completely rebuilt, Windows Live Messenger has been updated and Bing Games has been released to Australia, Canada, the United Kingdom and New Zealand.

By tying the three gaming sites together Microsoft hopes to make casual gaming more social. The hub will integrate with your Facebook account or your Windows Live account where you will be able to scroll through your friends status updates or send game challenges. Wolf went on to say:

It doesn’t matter where you play – on Messenger, on Bing, on your mobile device, or on your PC. You can have that sense of connectivity and competition regardless of platform, which is something no one’s ever really done before.

Microsoft concluded the announcement saying that the new game hub is a "very significant step into creating what the future looks like across all Microsoft properties, whether PC, mobile, Messenger or Xbox LIVE."