Microsoft has emerged as one of the most vocal opponents in the growing campaign against bulk data collection by government agencies around the world, and particularly in the United States.

Earlier this year, Microsoft said that planned reforms of the NSA didn’t go far enough and proposed the formation of international conventions on government data access to establish a legal framework that respects the need for access to data for law enforcement needs while balancing the right to privacy for end users. The company has also accused the US government of overstepping its bounds in issuing a warrant demanding that it hand over a customer's emails stored overseas, in an Irish datacenter. 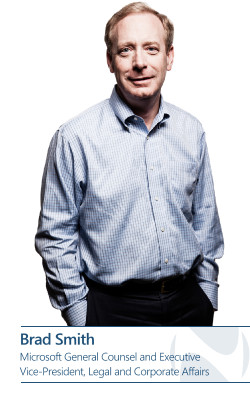 Microsoft evidently has no intention of giving up the fight, and its senior lawyer spoke today at the Brookings Institution in Washington, DC, calling for an end to "the unfettered collection of bulk data" by the US government. As CNET reports, Microsoft general counsel Brad Smith said that such indiscriminate accumulation of data has to stop, adding that Congress and the White House must step up to make changes without delay.

"By the end of this decade, there will be 50 billion devices connected to the Internet of Things around the world," he said. "This issue is going to become more important, not less."

He also pointed out the need for authorities to live by the laws that they create, and which they purport to uphold: "I want law enforcement to do its job in an effective way pursuant to the rule of law. If we can't get to that world, then law enforcement is going to have a bleak future anyway."

Smith also underlined the importance to companies of resolving these issues quickly. "We are in a business that relies on people's trust," he explained. "We're offering a world where you should feel comfortable about storing in the cloud... You need to have confidence that this information is still yours."

With revelations continuing to emerge about governments and law enforcement agencies accessing users' data with impunity, that sense of security and 'comfort' remains wishful thinking for now. But, of course, that makes it all the more important that large corporations like Microsoft and many others in the tech industry - who, as Smith says, stand "fundamentally united" against bulk data collection - maintain their opposition and continue to lobby for change.