Microsoft today officially confirmed that Internet Explorer 9 will be launching at 9 p.m PST on March 14 as was previously predicted by Neowin back in February.

The launch will take place as part of their "Beauty of the Web" event, which will be hosted by the Internet Explorer 9 team in Austin City Limits Live. The event will begin at 9PM on Monday, March 14, 2011 at the Moody Theater. 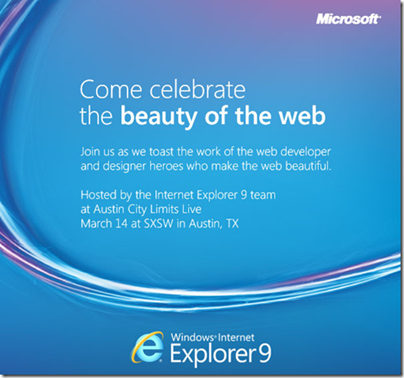 According to the Windows Team Blog, which announced the date today, the event will also mark a year to the day that Microsoft launched the first Platform Preview of Internet Explorer 9 to developers and the public.

Ryan Gavin, Senior director of Internet Explorer business and marketing also went on to say that the company have a number of additional surprises for those who head to the event. The blog also noted that Dean Hachamovitch would be the Day 1 keynoter at Mix 11 on April 12