Microsoft may have just started their promotional campaign for the Xbox One console with an impressive 90 second TV commercial, but that's not all the company is doing to get people to stand in line to buy the hardware and games. Microsoft is also apparently working on a live-action web series based on the Xbox One launch title "Ryse: Son of Rome." 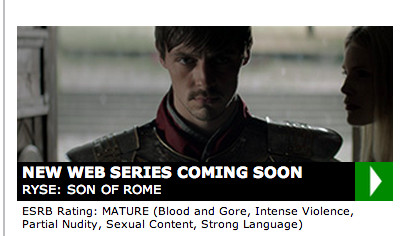 A small image popped up on the Xbox.com website before being quickly removed today, according to Polygon, which showed an image from the series and a "Coming Soon" title. It also shows the "Mature" ESRB rating for "Ryse," and if the game is any indication the web series will definitely be aimed at adults. Neowin has contacted Microsoft for comment and will update this article if a response is received.

"Ryse," developed by Crytek, was originally developed with the Xbox 360 console in mind and was announced way back in 2009 with the title "Codename Kingdoms." Later, Microsoft and Crytek switched gears and made "Ryse" as an Xbox One exclusive. Neowin got a brief chance to play an early version of the Roman Empire-based game at E3 in June.

This is not the first time that Microsoft has made a live-action web series to promote a game. The company did the same in 2012 with "Halo: Forward Unto Dawn," made to help sell he Xbox 360 title "Halo 4." After debuting as a web series, it was re-released with new footage as a 90 minute movie that was sold on DVD and Blu-Ray and made available on streaming services such as Netflix.