The revelations about just what the National Security Agency is able to do in terms of looking in on anyone's online content continued today; newly leaked documents from a NSA training manual show something called XKeyscore, which has apparently been designed to view online content from almost anywhere, coming from nearly anyone. 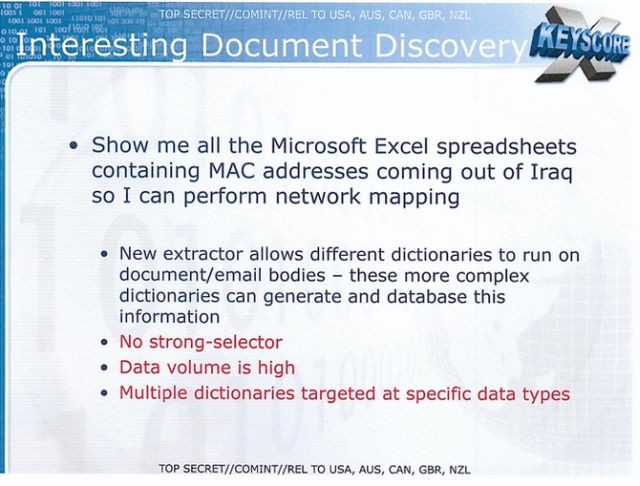 The Guardian, which has been the recipient of prior NSA information leaks from Edward Snowden, also posted today's documents about XKeyscore, based largely on a manual made in February 2008. In its basic terms, the program lets NSA analysts view the content and the metadata from almost any source.

One of the pages from the manual, shown above, shows an example of how this system works. It states that XKeyscore can view "all the Microsoft Excel spreadsheets containing MAC addresses coming out of Iraq so I can perform network mapping." While a court order is needed to follow a US citizen via XKeyscore, no such court order is needed for foreign targets, even if they are talking with US citizens.

In a statement to The Guardian, the NSA defended the use of XKeyscore, saying it was a part of its "lawful" foreign data gathering activities. It added, "Allegations of widespread, unchecked analyst access to NSA collection data are simply not true."