Last Thursday, Microsoft unveiled the next couple of months' development roadmap for its upcoming Flight Simulator entry. The firm also announced a change in schedule for Episode 7 and 8 of the Feature Discovery Series, which essentially comprised of their release dates being switched.

This time around, there aren't many new updates to report on. The main focus is on the Feedback Snapshot v2 being made generally available, along with yet another delay to the upcoming Partnership Series update.

In regards to the latter, Microsoft has cited "a series of unforeseen delays impacting travel" as the cause of running behind schedule. For reference, the announcement was previously supposed to arrive last week, but its release ended up being pushed back to allow the Flight Simulator team to focus on the Feature Discovery Series' Episode 6. This week, the reasoning behind the delay is different; either way, an update could be available as early as next Thursday.

As some may recall, a couple of weeks back, the second version of the Feedback Snapshot was showcased in the Insider Area. For those unaware, Feedback Snapshots serve as a round-up of current major Alpha issues under consideration, Alpha users' wish list, and their top questions. The latest version is now generally available and can be viewed below. 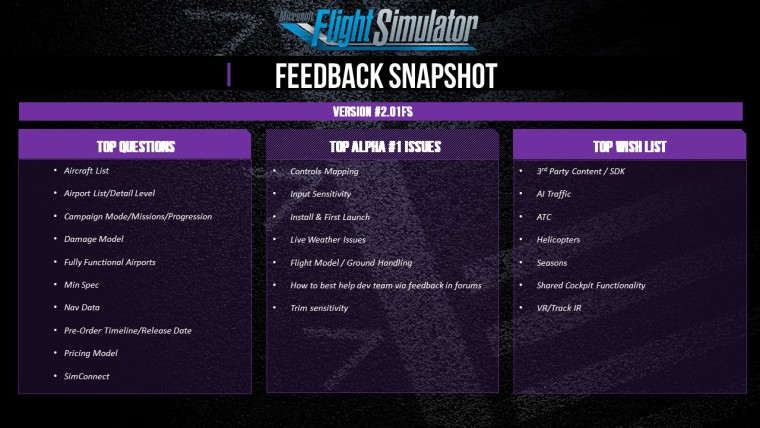 Comparing it to the first iteration of the Snapshot, it can be observed that the wish list has remained the same, aside from the exclusion of 3rd party content/SDK. The change in priority for SDKs makes sense since the first SDK release was made available last month. The list for top Alpha issues, meanwhile, is more extensive this time around, with live weather issues, input sensitivity, and flight model handling featuring in addition to most of the issues previously present. And finally, the top questions have remained largely the same as well.

With regards to the first update for next month, the release of Episode 8 in the Feature Discovery Series focusing on the multiplayer aspect can be expected, along with a Partnership Series update. Insiders may also get their first look at the development roadmap for April and May. Either way, stay tuned for more in the coming weeks.