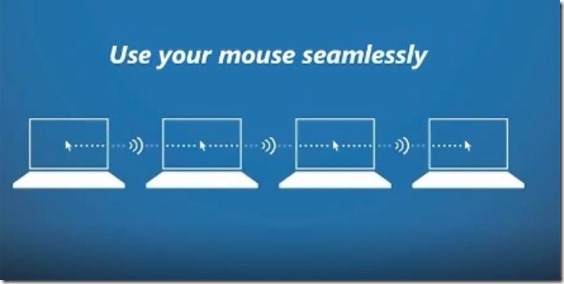 Microsoft's Garage division is dedicated to having team members think outside the normal development box and create new and innovative software and other projects. Usually these kinds of projects are released as part of a Microsoft commercial release or stay inside the company. However, this week the Garage team has done something a little different. It has released a new and free stand alone software application for PCs that should be very helpful for folks who use more than one PC in their office space. It's called Mouse Without Borders.

The 1.1 MB file allows the user to have up to four PCs linked together. The user can then simply use a single mouse to copy, paste, drag and drop files across all the PCs linked by the Mouse Without Borders application as if all of the PC files were located on just one desktop. As Microsoft's Steve Clayton explains, "I have two PC’s on my desk at work connected to 3 LCD screens and using Mouse Without Borders I can move my mouse between the 3 screens, even though one of them is attached to a different PC from the other two. What’s more, I can move files between the 2 computers simply by dragging them from one desktop to another."

In addition to the file movement features, Mouse Without Borders also allows the user to log onto all the PCs linked together by the program via just one PC. Finally, as Clayton states, "as a whimsical bonus is it allows you to customize your desktop with the daily image from Bing or a local collection of pictures." You can check out a video showing Mouse Without Borders in action below.