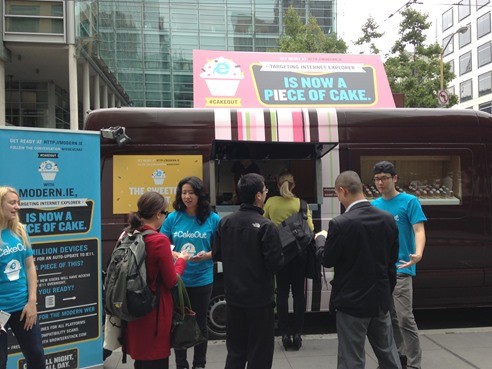 Microsoft decided to give many hard-working software developers in the San Francisco area some free cupcakes on Tuesday. The idea was to help promote IE11 and Microsoft's modern.IE development tools, and it seems to have been a big hit (free food is usually a good thing).

The official IE blog has a summary of the CakeOut campaign in the Bay area. Microsoft stated it got to talk with a number of developers to discuss not just the new modern.IE tools but also how the revised F12 tools made for IE11 can help web creators optimize their sites to run on Microsoft's latest web browser version

The free cupcakes that Microsoft was offering Tuesday were not just for third-party web developers to devour. Microsoft also posted word on the IE Twitter account that the CakeOut campaign showed up at the offices of Google and Mozilla to share some sugar and cake mix with the Chrome and Firefox web browser teams.

We KNEW our friends from @Firefox in SF would be up for a #CakeOut! pic.twitter.com/9NuszLelRi

Microsoft hints in the blog post that their IE CakeOut campaign may show up in other cities in the near future.