The demise of Microsoft's Lumia range on its UK store has been dragging out for months, but it seems that it's finally reached the end of the line. The company has now removed the last of its own Windows phones from the Microsoft Store in the UK, leaving only two options available to purchase from other manufacturers.

All four of its Lumia Windows 10 Mobile handsets had run out of stock there by mid-December, but it wasn't until January that the entry-level Lumia 550 was removed from the store. At the end of January - three months after the Lumia 950 had sold out - it too was deleted from the store. A week later, Microsoft also removed the flagship Lumia 950 XL, but left the 650, which remained out of stock.

Alongside the Lumia 650, it continued to list the 640 XL, a Windows Phone 8.1 handset that it launched in early-2015, and had also been out of stock for months. Bizarrely, earlier this month, Microsoft suddenly found more stock of the two-year-old Lumia 640 XL, and resumed sales at its original price of £219, rather than the £127.99 to which Microsoft had previously reduced its price in August before it sold out. 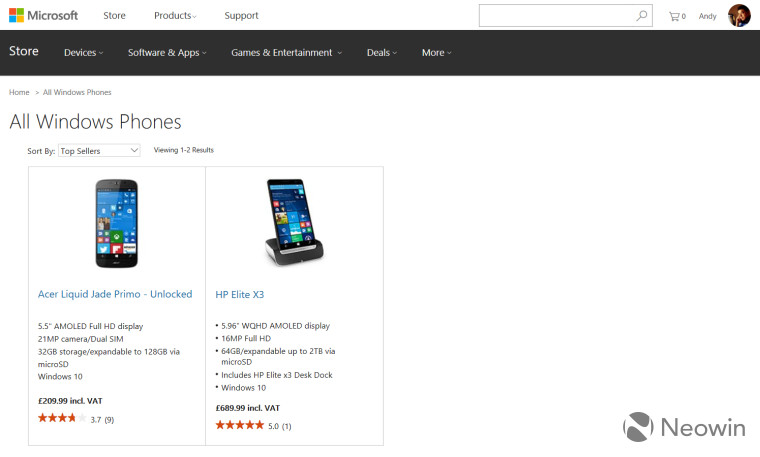 Now, the Lumia 650 and 640 XL have both been scrubbed from Microsoft's UK store, so those wishing to purchase a Windows phone there are left with just two choices. One is HP's flagship-class Elite x3, priced at £689.99, including the Desk Dock accessory; and the other is the £209.99 Liquid Jade Primo, which Acer originally announced in September 2015.

However, Acer confirmed in January that that device won't be getting the Windows 10 Mobile Anniversary Update, which Microsoft released last August; this makes it seem likely that the Liquid Jade Primo won't be getting the upcoming Creators Update either. Acer claimed that its decision was made as a result of the "instability of the operating system", although other manufacturers have succeeded in upgrading their handsets to the Anniversary Update.

If you're still determined to get your hands on a Lumia handset in the UK, some other retailers are still selling Microsoft's Windows 10 Mobile devices, although stock is evidently in short supply. Carphone Warehouse, for example, is offering the Lumia 950 for £399.99 SIM-free - but that's considerably higher than the £249 price at which Microsoft last sold that device in October. The larger Lumia 950 XL is available on Amazon from around £300 via third-party Marketplace sellers.