“Please put your phones, cameras and laptops in a locker, and we will then measure the distance between your pupils” is how the HoloLens experience began.

I call it an experience and not a demo because the word “demo” does not adequately describe what was about to happen after we walked down three flights of stairs and past 25 security guards whose arms were the size of tree trunks.

I had to have the distance between my pupils measured so that HoloLens could be calibrated for my eyes, but Microsoft said that in the production models, the calibration is done automatically, so consumers won't have to worry about this in the future.

Upon entering the venue where the experiences were being conducted, Microsoft taught us how to, for lack of a better term, left-click with HoloLens. You do this by putting your hand in front of the device – really anywhere in your line of sight – and tap your finger with an exaggerated gesture. It’s quite easy, as it only took about 10 seconds to figure it all out once I had HoloLens on my head.

Microsoft did not allow anyone to take photos of the devices we were using, as they were a bit rough around the edges and were prototypes; they looked nothing like what was shown on stage and are not representative of what the final product. The devices had a headset you wore and an auxiliary pack that hung around your neck with the processing units for the device; there was also a cord tethered to a PC, too.

I was walked through four experiences over a roughly 90-minute session, including Holo Studio; Minecraft; Skype; and my personal favorite, standing on freaking Mars. 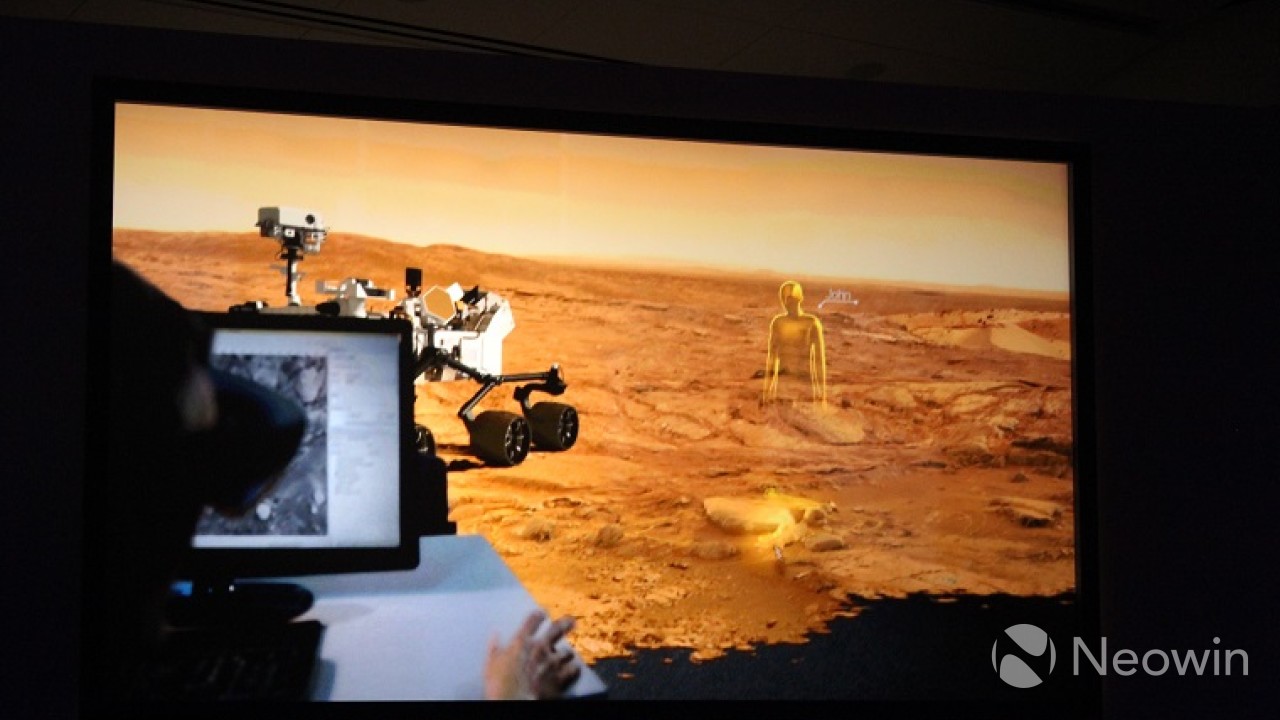 To get started, I walked into a room full of images of deep space, such as the Crab nebula, planets, and other galaxies. I then sat down on a stool and probably looked like a toddler who is about to go to Disney World; I can’t remember the last time I was this excited about a Microsoft product – or really anything from the tech industry.

As a big fan of space exploration and someone who watched Curiosity and Opportunity explore Mars knowing I would never get to stand on that planet, this was the closest I will ever get to becoming a Martian. At this point, I’m pretty sure I squealed and said something stupid to the effect of “put me on Mars!”

And with the click of a button, a worm-hole in the fabric of Microsoft and technology transported me to the massive red desert planet.

As I stood up, I realized this is the closest experience I will ever get to feeling like Neil Armstrong walking on the moon – everywhere I looked I saw Mars. The red planet was around me, I was standing on dirt, and I began to walk around and explore the planet like I had never done before.

What you see through HoloLens is a bit hard describe because you aren’t seeing a screen but having the images beamed into your pupil, which provides a different kind of experience. The images are clear, but it’s not like looking at a 4K screen, it is a lower resolution graphic but it does not take away from the experience.

Everywhere you look, HoloLens augments with your movements to complete the immersive experience and, frankly, it’s fantastic.

It is worth pointing out that the field where the holographics appear is limited to your direct line of sight. What this means is that even when on Mars, out of your peripherals you can see the room you are in on the top and bottom, left and right, of the holographics. This does take away from the experience and is an area we hope to see improved upon with future version of the device.

One thing I did not expect is that as I walked around Mars, when I turned around, I could still see the desk and PC as if they were sitting on Mars. Where HoloLens shows a significant amount of potential is when I walked over to the desk, I could see everything on my desk without holograms, as even though if I looked at my feet or under the desk, it was still on Mars. It felt like someone photoshopped this desk into the middle of the Martian desert which added to the surreal experience. 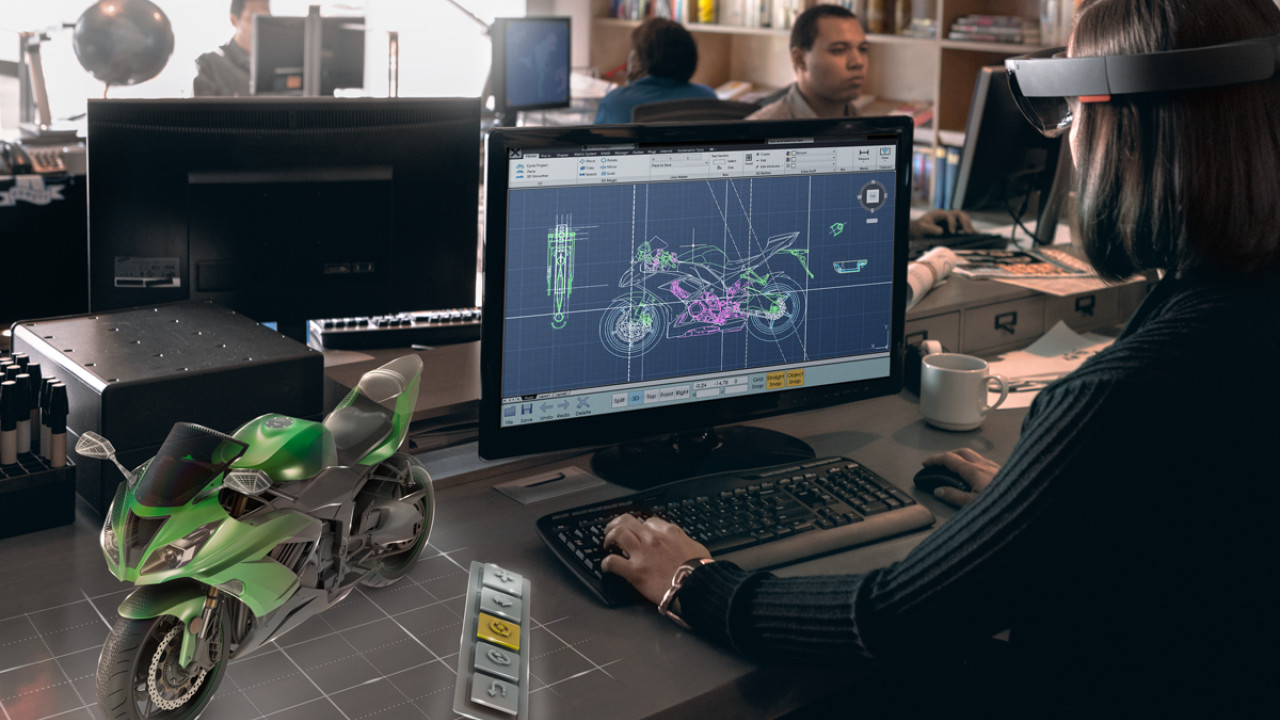 What this allows you to do, and the team did this before I arrived, is set a location or object for holograms to not appear on, in this case, the desk and the computer screen, so you can use the PC without interference. That way, if you look away from the screen, you can keep virtual objects next to your monitor and effectively turn your room into a giant monitor – no more complaining about only have two screens at work as everything is now a screen with HoloLens.

What’s even better is that if you take your mouse, you can move it around the virtual space – in this case, Mars – by moving off the PC display. I could click on rocks while using the mouse, but imagine using this with Photoshop, where you could take your mouse and go crop out an image from a magazine you are looking at without having to scan it in.

The use for HoloLens goes far beyond filling childhood dreams of being an astronaut; you can now fulfill the dream of being a character in a video game.

“Minecraft,” which the company conveniently purchased a few weeks ago, offers up a crazy new way to play the game. In this demo, you are tossed into the game, but the room you are in is filled with holographs that you can play with.

Without a doubt, the coolest thing was I could dig into any surface and look through it. You could, for example, look at a wall, pull out your shovel, and dig though the wall and see what’s on the other side, or you can cover your coffee table with water blocks and see it flow through your living room. 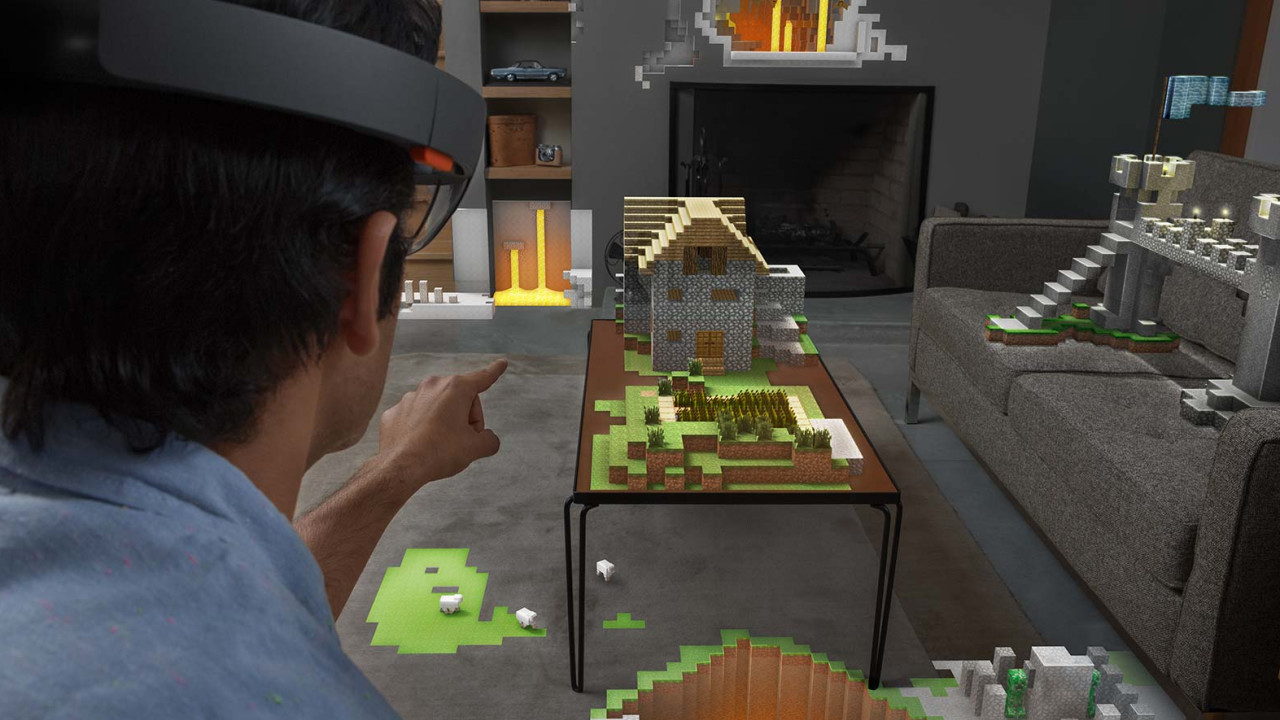 For those who have played “Minecraft,” this is taking the game to an entirely new level and was a lot of fun.

Skype and Holo Studio experiences show the utility of HoloLens, with the latter allowing you to create models in 3D and then print them out. Think of it as Microsoft Paint, but on steroids and ecstasy. The Skype call, on the other hand, shows immediate use for the device.

In this experience, I was repairing a light switch and got a Skype call from “Joe” to help me out. Joe could see what I was looking at, thanks to a built-in camera, and on his side, he could draw on his screen which shows up as a hologram for me. He would draw arrows to the wires I needed to attach and how to use the correct tools for the job; while Skype may not sound exciting but the utility of this feature is significant for consumers.

After I got done using HoloLens, I understand why Microsoft is charging forward in this space. While these devices are currently a bit large and the holograms could fill out your entire field of view a tad better, this is the future of computing.

What HoloLens shows is the future of Microsoft and how the company is thinking about computing outside of the desktop and it’s exciting. While there is a long way to go before HoloLens is a household product and replaces a laptop or tablet, the foundation has been set.

As this product grows and matures, it will only getter better, smaller and faster, which has me excited – genuinely excited – about what Microsoft is doing here. Thinking back to sitting in the chair while waiting for the Mars experience, I can’t remember the last time I almost peed my pants with excitement while trying out a Redmond product.