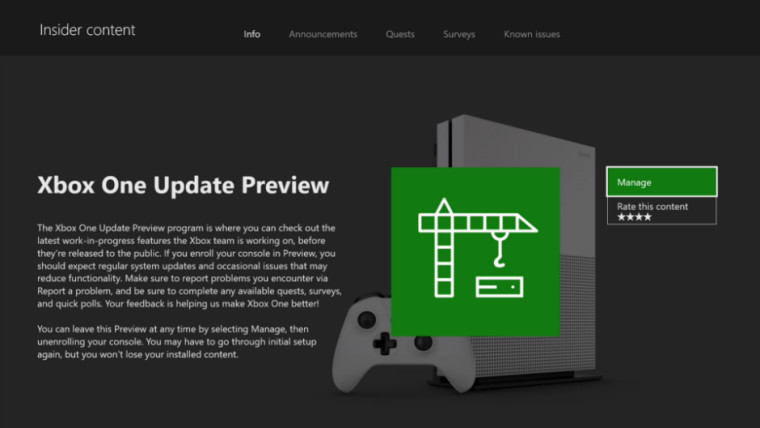 Two weeks ago, Microsoft announced that the Xbox Insider Program is getting its own Skip Ahead ring, just like the Windows Insider Program. A few days later, enrollment was open for all Insiders on the Preview Alpha ring, even though no Redstone 5 builds are available yet.

As the firm originally promised, it announced today that it's sending out invitations to those that are on the lower rings of the Program, including Beta, Delta, and Omega. The invitations are based on the quality of your feedback.

Similar to the Windows Insider Skip Ahead ring, space is limited and it's first-come first-serve. That means that if you want to be among the first on board the Redstone 5 train, you'll want to sign up as soon as possible. And if you haven't gotten an invitation, make sure to submit feedback through the Xbox Insider Hub so you're on the short list.

The ring itself works differently than it does on Windows, and that's because Xbox One gets more frequent feature updates. When Windows Insiders start getting new builds in Skip Ahead, it will be for the spring 2019 feature update, codenamed 19H1, while Xbox Insiders will be getting Redstone 5, which is due out this fall. That's because Windows Insiders on the Fast ring are already getting Redstone 5 and have been for months, while Xbox Insiders on the Alpha ring are seeing 1806, a feature update that's part of Redstone 4, but due out this month.