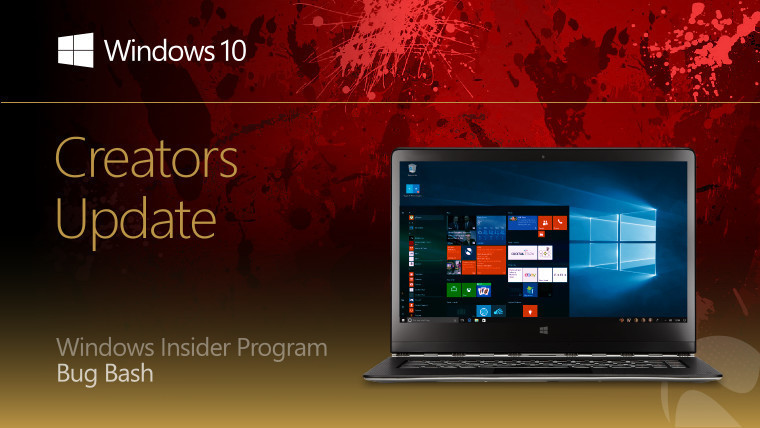 Microsoft has begun its latest Bug Bash event, its first since announcing details of the upcoming Windows 10 Creators Update last month. Previously known by its development codename, 'Redstone 2', the update will roll out to Windows 10 users around the world early next year.

Microsoft's first Bug Bash accompanied the rollout of Windows 10 Insider Preview build 14332 in April, encouraging those on the Insider Program to help the company identify and eliminate bugs in the OS before its eventual release as the Anniversary Update in August.

"As with previous Bug Bashes," Microsoft's Michael Fortin said today, "we are using Quests within Feedback Hub to identify different areas of the product to try out and give feedback. Throughout the week, we will cycle through new Quests and will bring them all back over the weekend for additional feedback before we conclude the Bug Bash."

The latest Bug Bash focuses on Windows 10 build 14959, which was released to the Fast ring last week. Insiders can find Quests in the Feedback Hub app, under the navigation tab of the same name. Fortin added:

Quests will be marked with:

Quests marked as “ADVANCED” are more technical and may require changing the system configuration on your device and require an understanding on how to revert the changes after the Quest is done. You should only perform Quests that you feel comfortable doing, if something goes wrong you’ll need to be able to troubleshoot how to get back to a good state on your device.

Quests marked as “Developer Quests” specifically are designed for Developers and may require coding.

Microsoft says it will be "recognizing Windows Insiders for their participation in the Bug Bash" by awarding them badges in the Feedback Hub after the event ends on November 13 at 11:59pm PST.

Source: Microsoft (opens in Feedback Hub) | Thanks to @KPRP42 for the heads-up!