Vegas is unseasonably cold (it even rained today!), but the conference is hot with lots of topics to cover and people to talk to. We attempted a liveblog of the keynote, but when the Mandalay Bay hotel lost Internet access, things were a little dicey. That didn't stop Brad Anderson, corporate vice president of program management in Microsoft's Windows Server and System Center Group, from kicking off the Microsoft Management Summit 2013 conference, and he had a lot of great things to talk about. While we won't get into depth on any of the topics, we'll give some of the highlights. 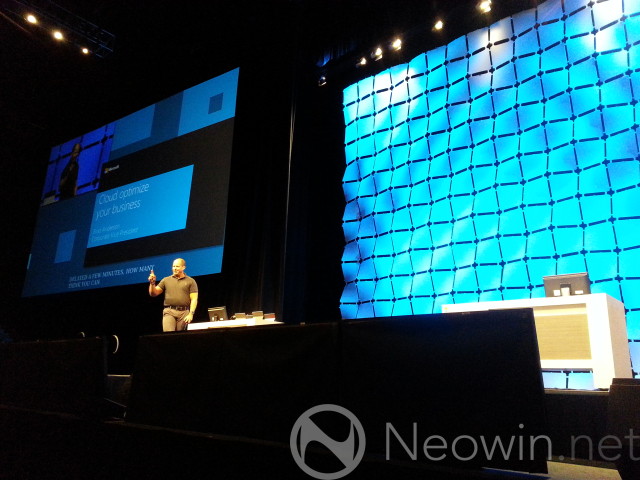 The theme for the keynote was Cloud Optimize Your Business, and there were four transformational trends: Cloud Computing, Consumerization of IT, New Social and App Patterns, and Data Explosions.

Microsoft's vision for the Cloud-based OS (not to be confused with Chrome) is to provide a consistent platform for applications, virtualization, management, and data across all of the clouds you want to use, and they hope you choose Azure. The concept is to have a datacenter without boundaries. Windows Server 2012 is the foundation that Azure runs on, and it ties together with on-premise versions of Windows, giving a consistent management plane for the public and private cloud (also known as the hybrid cloud). Anderson also made a somewhat controversial statement: "Windows Server 2012 is the best OS ever released." Linux supporters may want to disagree with that statement.

Anderson also talked about a recent acquisition, StorSimple, to which he claimed it was the "most amazing acquisition we ever did." The technology allows an administrator to combine both local and cloud-based storage in a single pool, all transparent to the end user. Simply put, the tool can push seldom-used data blocks out to the Azure, while keeping the frequently used blocks on a local file share. This can be used not only to extend storage, but also for backups, giving up to an 80% reduction in up-front storage costs.

Microsoft is also looking to transform networking, as it's been a block for the agility that organizations require. The idea is to be able to share infrastructure not only across racks, but also between datacenters and even multiple clouds. Anderson announced that Microsoft joined the OpenDayLight project as a founding Platinum member.

There was also an interesting concept around securing the data itself as opposed to protecting the corporate perimeter. Without "Data Loss Protection" (DLP) tools, there's nothing stopping a user from copying data to a USB thumb drive. With Intune, you can set policies based on the user, device, and location. This gives administrators the ability to provide a consistent view across devices - think "Bring Your Own Device" (BYOD) - by publishing applications to individual devices. Anderson also showed a demo where a PowerPoint presentation was protected based on the word "performance" that was inside the document. While on the local network, access was immediate. When trying to view the document on a different device, the data was not available, instead prompting the user to authenticate with their Active Directory credentials. This initially made us believe that Microsoft was going "always on" for Office as well, but it doesn't sound as scary as with the Xbox 360 rumors since you need access to AD to do many other things as well.

Overall there's a lot of information here and we'll bring you the latest from Microsoft's conference as the week continues.

Some random, interesting facts from the keynote: