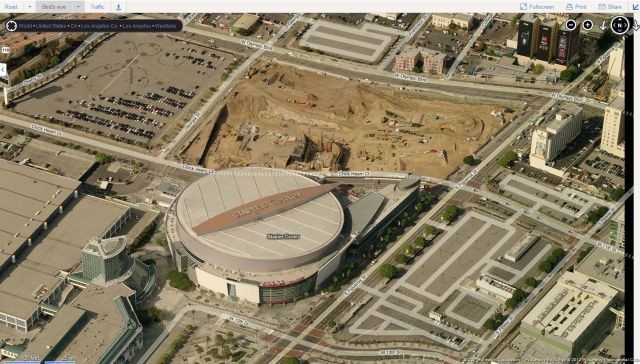 A few days ago, we reported that there were still some noticeable gaps in the images that Microsoft provides for the Birds Eye viewpoint in the web-based Bing Maps. We found that the massive LA Live complex in Los Angeles and the huge CityCenter buildings in Las Vegas, both of which were completed over three years ago, are still shown as under construction in the Birds Eye view in Bing Maps, while the images in the Aerial View show them as being completed.

We also noted that the Maps app included with all Windows 8 and Windows RT PCs use the old Bird's Eye photos of both locations, rather than the updated photos that Microsoft has for the Aerial View.

We contacted Microsoft to find out when these images, which are clearly several years old, will be updated with the completed structures. We received a response today from Matthew Quinlan, the director of product marketing for Bing.

We refresh our imagery periodically and timing varies on the type of imagery. We updated our aerial imagery of these landmarks as part of our Global Ortho project which was completed in August and captured the contiguous United States and Western Europe over the last two years. There are many factors that affect when specific areas and imagery types, such as Bird’s Eye, get refreshed, and we do not have specific details on timing to share at the moment.

So basically if you live in LA or Las Vegas and are using the Maps app in Windows 8, or the Birds Eye view in the browser-based Bing Maps, be aware of these rather obvious gaps in the images.