Once again, Microsoft Security Essentials has failed AV-Test's antivirus certification, after not meeting the criteria to pass their December 2012 testing suite. AV-Test conducts antivirus software testing every month, pitting 25 programs against 0-day attacks and known malware while also testing the repair capabilities of the software and its usability. To pass certification, the app must score at least 11 out of a possible 18 points across the three tested categories; MSE scored 10 and so just managed to fail the criteria.

Security Essentials failed largely due to poor protection against 0-day real-world attacks, protecting against only 78% of attacks. While this may not sound particularly bad, and it's an improvement over 71% protection of November, it still falls well short of the industry average 92% protection in this area. MSE also failed to meet the industry average detection of malware discovered in the last 2-3 months, scoring just 90% compared to an average of 97% across other suites. An overall poor Protection score of just 1.5/6.0 meant MSE couldn't manage the required 11 points. 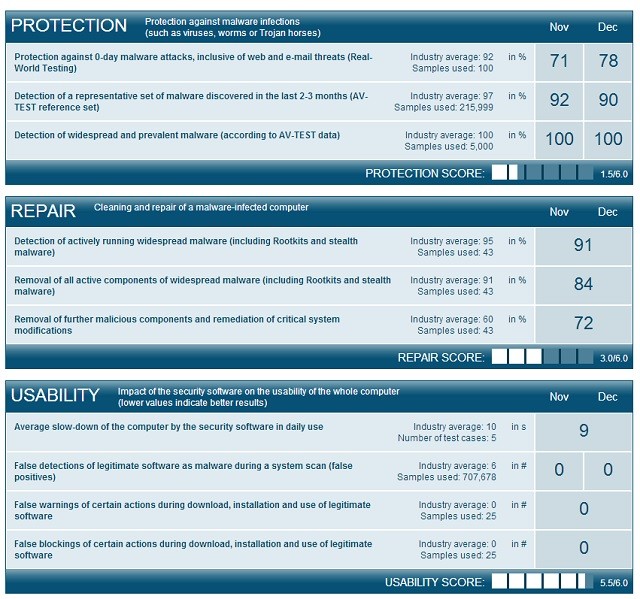 MSE was one of three antivirus suites that failed the certification in December 2012, the others being AhnLab with a measly score of 8.5 and PC Tools Internet Security with 10. While MSE is a free suite, it does not excuse its poor performance in testing, as many other free programs such as Avast, AVG's Free Edition, ZoneAlarm and Panda Cloud all gained certification.

When it comes to the best antivirus suite, the winner once again was Bitdefender Internet Security 2013 which scored 16.5 out of 18. Kaspersky's antivirus suite and Symantec's Norton suite also scored highly, passing certification with 16 points, while numerous other applications managed to improve their scores in this round of testing.

It should be noted here that AV-Test performed all antivirus testing on Windows 7, so it's unclear if the integrated implementation of Microsoft Security Essentials in Windows 8 performs any better than the standalone free suite for Windows 7.