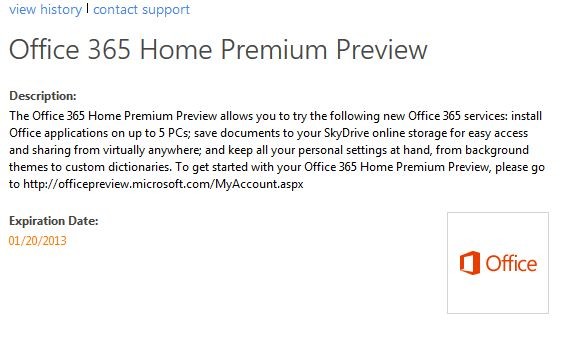 For the past few days, we have heard that some people who have downloaded and used the free Office 2013 preview version via Office 365 have been seeing that their trial would be expiring very soon. Some reports, such as the one we spotted at McAkins Online, said that the preview build would be expiring today, January 16th. Our own preview version of Office 2013 shows a expiration date of January 20th when we checked out Microsoft Account info.

Well, we checked in with Microsoft and and finally received a response today. The short answer is that Office 2013 preview users don't have anything to worry about. The word from their spokesperson is as follows:

Your trial will not expire but in fact renew automatically. However, the trial will still expire 60 days after the next version of Office becomes available.....people who see the notification in their billing section will not have to reset anything, it will be done automatically. If people have not checked the billing site until now then they wouldn’t have known that something similar has happened in previous months.

So if you are still using the preview version of Office 2013, you still have at least a couple of extra months, and most likely longer, before it expires. As far as why people are getting these false notifications, that's something that Microsoft is apparently still working on.