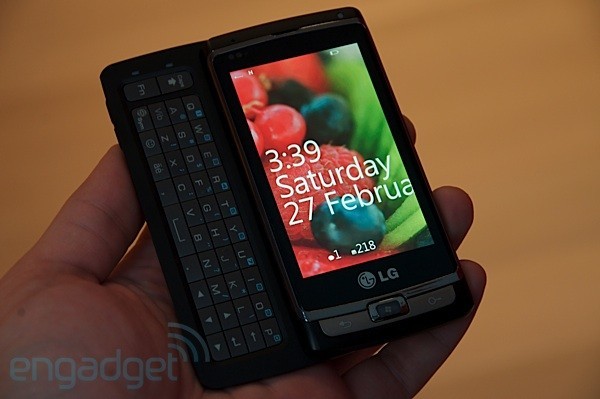 Last week we reported how LG could be planning to launch a Windows Phone 7 Series device as early as September this year. Now the first pre-production prototype of this possible device has been shown off by Microsoft during filming of The Engadget Show.

The LG model is the first official branded hardware we've seen of a Windows Phone 7 Series handset and seems to perfectly fit the hardware requirements defined by Microsoft for any devices running their latest mobile operating system, which was unveiled at the Mobile World Congress in Barcelona last month.

Microsoft's Aaron Woodman revealed the prototype and gave a quick overview of some of the hardware features it includes. The device sports a QWERTY slide-out keyboard as well as a touch screen and the three standard Windows Phone 7 prescribed buttons: back, home and search. Other buttons include power, camera and volume controls.

Engadget say the device is "just a hair thicker than an iPhone or Nexus One" and features a five megapixel camera and flash on the rear, and a headphone jack. They also reiterate that the device is still a prototype so anything could change between now and when the device is launched (whether that be September or sometime later). Check out a video of the phone and some hand-on photos of the hardware over at Engadget.