Last month, Microsoft put out a video and a blog post espousing the benefits that using Edge could have on your battery life. In it, the company showed that Edge was the most efficient browser, though its results were quickly contested by Opera. Now, Microsoft is back explaining more of the methodology behind the test and arguing that Edge is not only the most efficient browser, but the best browser to stream video on.

The test that Microsoft performed pitted the four major browsers against each other, with each streaming the same video from a “premium video site”. The test was supposedly skewed against Edge, which received higher-quality 1080p video, unlike its competitors which only got 720p content. The site in question was later confirmed to be Netflix.

Users are still debating whether battery usage while streaming video is a good metric to base browser benchmarks on, but Microsoft wants to move past this debate completely. Instead, the company is arguing that the many hidden features under the hood make Edge the best browser to stream video on. Period.

According to Microsoft’s explanations, the main reason that Edge got such good scores in its tests has to do with the way the browser delegates video decoding away from the CPU. The company mentions that Edge relies on DirectX video acceleration as well as “sophisticated graphics and UI compositing features” that offload video rendering. Edge also offloads audio stream processing. 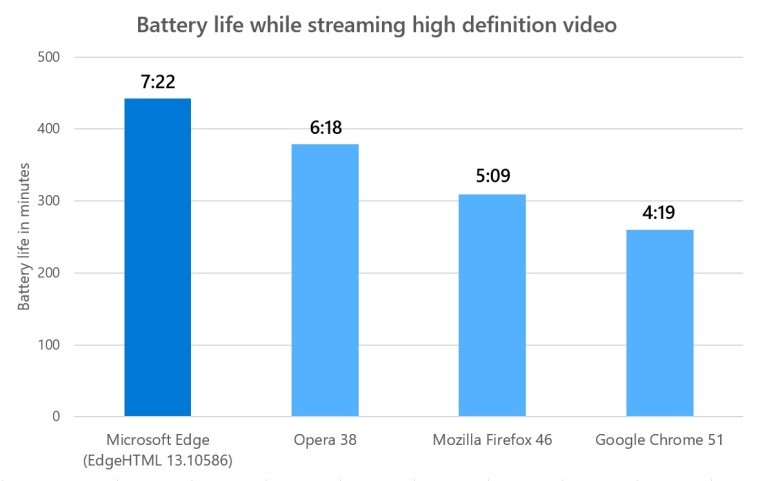 The next element supporting Edge’s video processing capabilities, actually has to do with Windows 10 itself. CPU management in Microsoft’s latest OS keeps a device’s processor running in the lowest power state possible, saving battery life. Windows can also lower screen refresh rates while displaying video, reducing memory bandwidth. Of course, these being Windows features, other browser vendors can also use these features but Microsoft says that Edge is the only browser properly and speedily optimized to take full advantage of what Windows 10 has to offer.

Finally, Microsoft argues that the way Edge implements PlayReady Content Protection DRM is also a contributing factor to the higher quality video and better battery life that the browser got in tests. Looking towards the future, the company envisions everybody relying on 4K UHD streams, with HDR displays and dedicated DRM chips to ensure content creators feel safe to distribute their works. And that’s not even a long-term or mid-term future, as Microsoft says support for hardware-based DRM will come this Fall.

All in all, Microsoft is making a pretty convincing case, with Edge being at least a good candidate if not necessarily the outright winner when it comes to your video streaming needs.