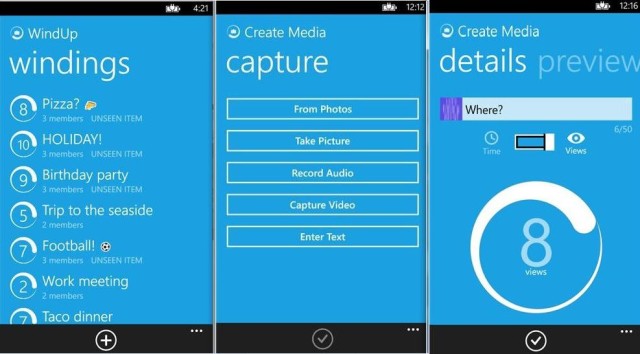 Late yesterday, a new app from Microsoft's research arm was found in the Windows Phone store called WindUp, but Microsoft has issued a post on its blog that says that the app is not a Snapchat competitor.

If you are not familiar with Snapchat, it is a messaging service that allows you to send text or images that are only visible for a small amount of time that the user can define. For example, you can send an image to a friend and after 10 seconds, it can no longer be viewed by the receiving party and is gone permanently. So when Microsoft released WindUp that allows you to share content in limited capacity, it feels a lot like Snapchat.

Here is how Microsoft describes WindUp in their new blog post:

WindUp is a mobile application for research purposes only that enables users to share images, videos, text, and audio snippets for a finite period of time, or for a designated number of views, before the content in question is deleted permanently.

That's definitely not like Snapchat, right? But they do go on to clarify that this project is a research application that is designed to let the team at Microsoft see how content is shared.

The application is designed to enable me and my team to explore patterns of content creation and exchange.  It isn’t meant to compete with anyone else’s service, and it isn’t meant for commercial purposes.

At Microsoft Research, part of our work from time to time involves building prototypes that let us explore some basic research questions. We hope that people give WindUp a test and share their experiences with us, and we look forward to the feedback and the insights we’ll gain.

Ignoring the fact that Microsoft monitors how the content creation and exchange occurs because that doesn't exactly scream privacy, we do understand what they are trying to say. This application is for testing purposes only and is not considered to be a core product from Microsoft. Besides, if you have tried to use the app, it is a dismal experience and leaves a lot of room for improvement.

To avoid this confusion in the future, may we suggest that Microsoft issue a blog post when it pushes out apps under its own name so these comparisons are not made incorrectly. Besides, it's not like Microsoft has ever had confusing statements hit the wire before, right?