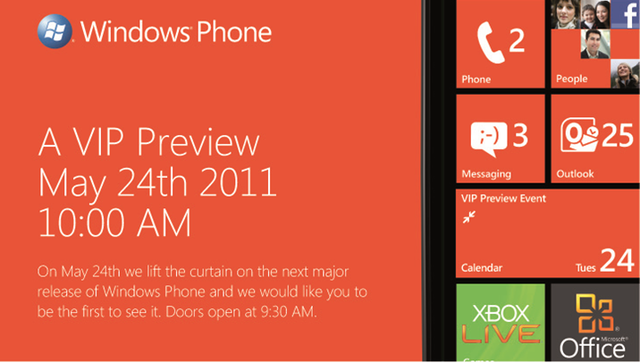 Microsoft is working hard to make WP7 not only a competitive player in the mobile OS world, but a platform that dominates the category. Despite a few hiccups with updates, Microsoft has already updated the platform with NoDo and is looking to continue that trend with Mango.

On May 24, Microsoft will be unveiling Mango (via ZDNet), which is expected to be called WP7.5, in New York and in London.  The event will show off what the next generation of the platform and will certainly bring many new features to the table.

A few of the new features have already slipped out including Bing Audio, Bing Vision, Turn-by-Turn navigation, SMS Dictation and more. The update will expand the capabilities of WP7 and should also attract more users to the platform.

What else Microsoft has on deck for the platform remains to be seen, but the platforms desirability is growing with each update. Despite being late to the market, the new UI helps separate WP7 from the other contenders on the market. Couple this with a growing Marketplace, and you have the foundation for future success.