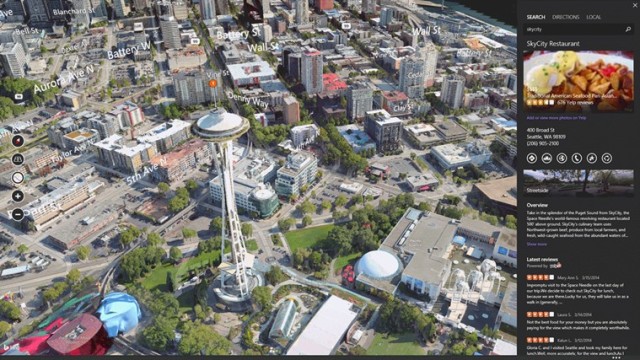 Windows 8.1 users have been able to access Microsoft's Bing Maps service via two dedicated Modern UI apps. This week, both the Bing Maps and Bing Maps Preview apps have been updated with a number of new features.

Both apps have now added integrated reviews of restaurants, hotels and more locations on their maps from services like Yelp and TripAdvisor. The regular Bing Maps app has also changed the search box and map control UI so that they are always visible for the first time. Search results have been improved in the app with this update, including adding autosuggest, and any user favorites can now be seen across both the Windows 8.1 and Windows Phone 8.1 versions.

The Bing Maps Preview app, which launched in December, also has some new features in its latest update. The biggest one is the Explore 3D Experience, which allows users to quickly find the over 80 cities worldwide that Microsoft has rendered in full 3D inside the app. Microsoft has not actually added any additional 3D city locations in this new update, but at least new users can now find the urban areas that are shown in the more advanced format.