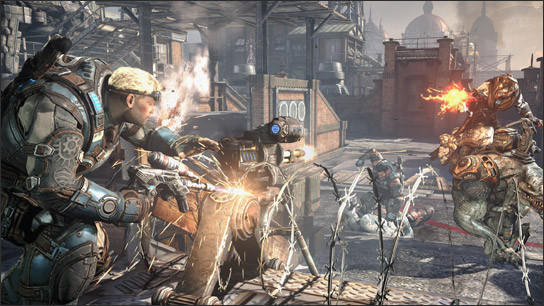 Gears of War: Judgement, the latest game in the popular Xbox 360 sci-fi third person shooter series, is not scheduled to be released until March 19th in the US. However, reports have come in that the full and final version of the game from developers People Can Fly and Epic Games has already been posted on a number of pirate and torrent sites.

Eurogamer reports that the game's publisher Microsoft is aware that the full version has leaked out a month ahead of its release, and added that it is working with its own security teams as well as law enforcement authorities to, in its words, "... address the situation immediately."

Microsoft also put out a warning for anyone who might be tempted to download and play the pirated version of Gears of War: Judgement, saying:

Consumers should be aware that piracy is illegal and we take vigorous action against illegal activity related to our products and services ... Playing pirated copies of games, such as Gears of War: Judgment, is a violation of the Xbox Live Terms of Use and will result in enforcement action, such as account and console bans

Microsoft previously had to deal with Halo 4 showing up on pirate websites nearly a month before its launch in November 2012.