We've known for quite a while now that Microsoft has been working on two new flagship phones; launch devices for its new Windows 10 Mobile operating system.

Earlier today, much of what has been rumored about the new Lumia 950 and Lumia 950 XL handset was confirmed, in slides that were photographed at a Microsoft Mexico event for the company's staff, to familiarize them with the new devices ahead of their launch. And among the various slides shown at the presentation was this one, showing a third handset - the Lumia 550: 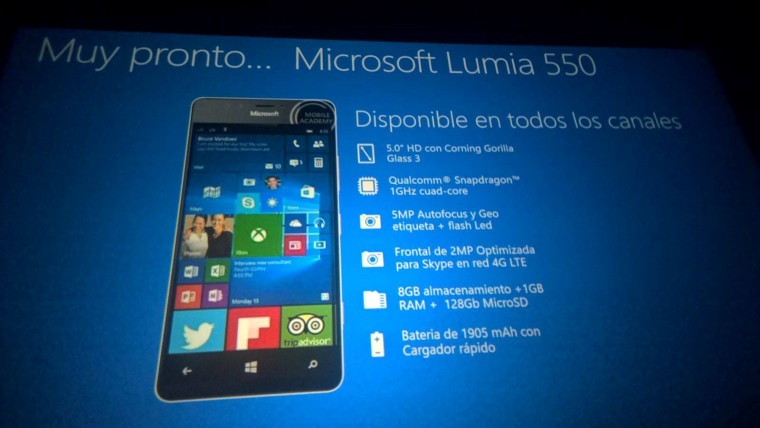 Reports of the Lumia 550 have recently begun to emerge, hinting at a low-end device destined to replace the Lumia 640, which it was said to closely resemble. The image of the Lumia 550 in the slide above is similar, but not identical, to an alleged render of the handset that was published last week. However, today's image features many notable differences, including hardware Back, Start and Search buttons; a different ear speaker grille; and alternative placement of the front-facing camera.

The specs shown in today's image also differ from those previously rumored:

Details of pricing and availability were not revealed - but according to the slide, the handset is coming "very soon". Whether or not Microsoft plans to announce it alongside the Lumia 950 and 950 XL (as well as the Band 2 and Surface Pro 4) at its October 6 event remains to be seen - but Neowin will be there to find out.