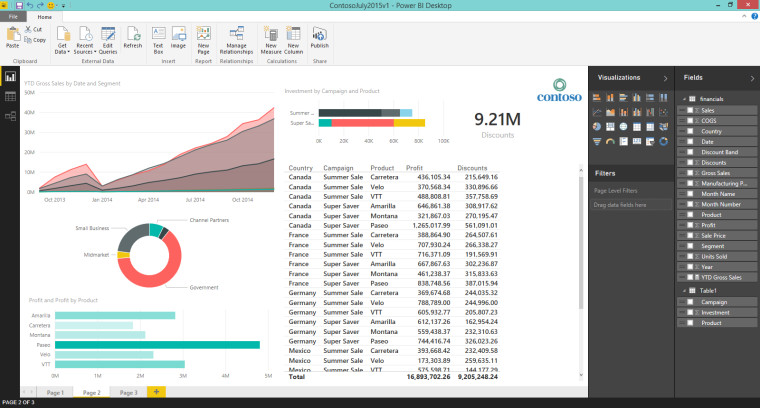 Microsoft has announced today that Power BI will be generally available starting July 24th. For those keeping track at home, this is yet another major release for the company in July as Windows 10 and Visual Studio 2015 are also being released this month.

With this release, Microsoft is renaming Power BI Designer to Power BI Desktop. The app, which is a data visual exploration and interactive reporting tool is available for free, allows you to create a custom canvas for data visualization. In this release, Microsoft is introducing several new features including new visualizations such as matrix, area, waterfall, and donut charts. In addition, data source support has been extended to include Zendesk, Intuit Quickbooks Online, AppFigures, GitHub, Twilio, and SweetIQ. There's quite a bit more added too that you can find at the source link below.

In recent months, Microsoft has shown that it is improving its support for the open source community. The company has also announced that they are releasing their commercial grade visualization framework on GitHub. This release will allow customers to create their own custom Power BI tools and integrate them into their own projects.

For those of you who use Android, there is a new Power BI app out today that allows you to put the data dashboards in your pocket; Microsoft has previously released iOS and Windows versions. You can download that app from the Google Play store here.

Microsoft's Power BI tool is a key component to their data offerings as it allows for an easy way to create unique dashboards to visualize your data. And with an open source aspect now included, the tool is increasing its flexibility for the enterprise too. When you couple this announcement with Visual Studio 2015 and Windows 10, Microsoft is about to revamp its entire corporate app portfolio.