Earlier this week, Microsoft officially launched Office 2013 and the new Office 365 Home Premium service. The new productivity software suite also supports downloads of apps via the Office Store and Microsoft said at the time there were over 200 apps available for users. 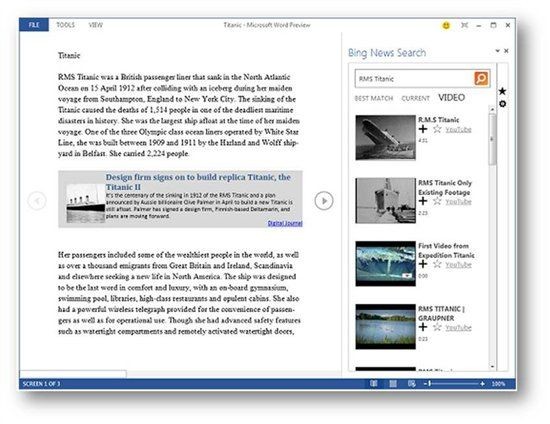 Today, the Bing team at Microsoft announced they were joining the Office apps party with no less than five free apps in the new Office Store. Microsoft said, "With Bing Apps for Office we are introducing ways for you to be more productive without having to leave the applications."

One of the apps is Bing Dictionary (English) which should be helpful for all Office applications. Microsoft states, "Aren’t sure of how to spell something? Simply enter words as they sound and Bing can suggest letters, words or phrases, optionally specified by part-of-speech." There's also Bing News Search for Office which allows users to search on the Internet for news and videos from within a Word document.

Bing Image Search for Office gives Word users a way to search for images on the Internet from inside a Word file by either selecting text in the document or typing in a phrase in the search box. Bing Maps for Office uses Excel to find locations on Microsoft's Bing Map. Microsoft says, "You can adjust the map view to road or birds eye. Imagine overlaying census data on a state map."

Finally, there's the Bing Finance for Office app, which apparently is still considered to be a beta version by Microsoft. Microsoft says of the Excel app, "You can input stock symbols and customize the fields you’d like to display by selecting from a wide range of data columns, including current price and news."