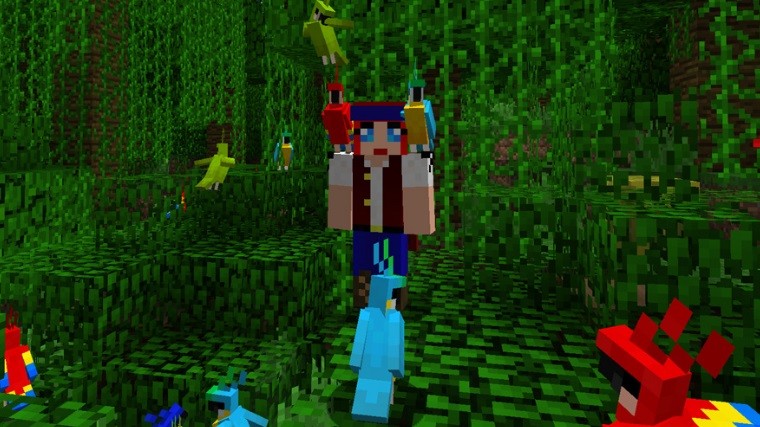 Parrots are set to arrive for Minecraft's PC version in the upcoming 1.12 'World of Color' Update. However, the colorful birds have already been available in the game's development versions since snapshot 17w13a.

Earlier this week, a user on Reddit going by the name 1jl pointed out a problem with how players breed parrots, which involves feeding the birds cookies. The issue is that in real life, chocolates can be lethal to birds, and since Minecraft cookies appear as chocolate chip cookies, the user had concerns of kids feeding their pet parrots chocolates and causing harm.

The post quickly blew up, with it currently boasting over than 37,000 upvotes and becoming the highest upvoted post ever on the Minecraft subreddit.

Yesterday, in a statement to Motherboard, Minecraft Lead Creative Designer Jens Bergensten said another food item would replace the cookie based parrot breeding mechanic in an upcoming update.

"If Minecraft has any effect on children's behavior, we want it to be a positive one, so we'll change the item used to breed parrots before the 1.12 update is released," said Bergensten.

In effect, the new update is now live, dubbed 1.12 pre-release 3, where players can now breed parrots using seeds instead, and feeding a cookie to one will instantly kill the bird, with some added poison particles for good measure. Let's just hope kids punching trees will not become a concern at a later date.

The pre-release's full changelog is found here; in addition to parrot dietary changes, the update includes quite a number of bug fixes.