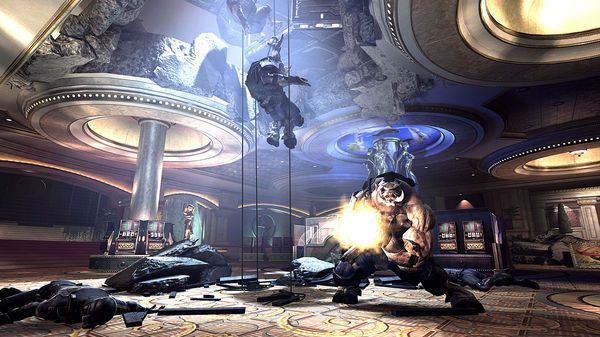 We start out a new work week with word that PC gamers can now go ahead and pre-order Duke Nukem Forever on Steam and also on Direct2Drive. Yes. the long awaited first person shooter from Gearbox Software can now be purchased ahead of its June 14 release. Both sites are offering a 10 percent discount for folks who want to put down their money ahead of its launch.

Also on Steam today is a week long sale for the indie game SpaceChem. The acclaimed puzzle game from developer Zachtronics Industries is priced at just $7.49 from now until May 16. The game has just been updated with a new level editor along with some new content that's related  to Valve's multiplayer shooter Team Fortress 2. Over at Direct2Drive the site has the Mac version of Dragon Age 2 on sale for today only for $29.95, a 50 percent price cut from its normal price. Over at the Impulse web site has a one day sale on the sim game Freight Tycoon Inc for $3.74. Also on Impulse the space strategy-action game Space Pirates and Zombies is available for pre-order for 25 percent off. You also get access to the game's beta test.

Finally the GamersGate web site has a week long sale of all the games from publisher 1C Company. You can get a ton of games from the Russian publisher for 70 percent off. You can also get a massive bundle pack with over 35 games from 1C Company for just $49.99.