If you've heard this one before, stop me now. It appears BGR has discovered a unique block of code within the iOS 4 firmware that shows more evidence that field testing of the CDMA (Verizon) iPhone is in the works. 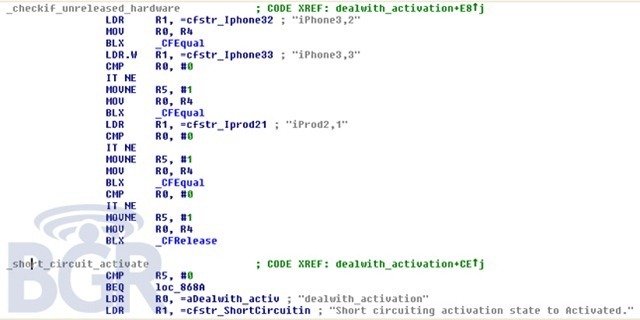 The snippet of code is said to turn up within the firmware every year, and is subsequently removed just before the release of the next iPhone. The code allows carriers to field test new products on their network, without the need to activate through iTunes.

Back in April, evidence of “iProd2,1” and three instances of the iPhone, “iPhone3,1”, “iPhone3,2” and “iPhone3,3” turned up inside of the 3.1 firmware, now these hardware codes have shown up under the activation code. The iPhone3,1 turned out to be the iPhone 4, so these two remaining instances could prove that Apple is set to release a CDMA version of the device. The iProd was code for the iPad, so Apple might be testing the next edition of the device.

But as always with Apple, they won't reveal anything until days before the unit is scheduled to ship, and if we're lucky, will see a leaked version of the hardware floating around the Internet.

If Apple does produce a CDMA version of the iPhone 4, they are likely not to mention anything before the ship date, to keep sales strong. With that, Verizon and Sprint will finally be getting the iPhone on their network.