The model that the Lenovo-owned company sent me is the Moto G6. As you might expect, the theme is about bringing features we've seen in flagships down to the less expensive devices. I reviewed the Moto Z2 Force flagship phone last year, and then I reviewed the Moto X4 upper mid-tier handset.

The next step down from the Moto X4 is the G6 lineup, which consists of the G6 Play, the G6, and the G6 Plus. Only the former two are available in the United States. While most of the new features are brought over from higher end devices, one thing is new: the 18:9 display. Last year's devices from Motorola were 16:9, and the G6 is the first handset from the company to embrace the new form factor.

Motorola went with an all-glass design this time around. Unfortunately, that does not mean that it includes Qi wireless charging, which isn't entirely surprising given the price point. This also means, however, that it's more susceptible to cracking and expensive repairs.

The back is made of Corning Gorilla Glass 3, so it's strong glass, but glass still breaks. Glass-backed phones are a big trend these days, but when wireless charging is offered, there's at least a benefit to it. If it's just there so it looks pretty, I'd rather have metal or plastic. 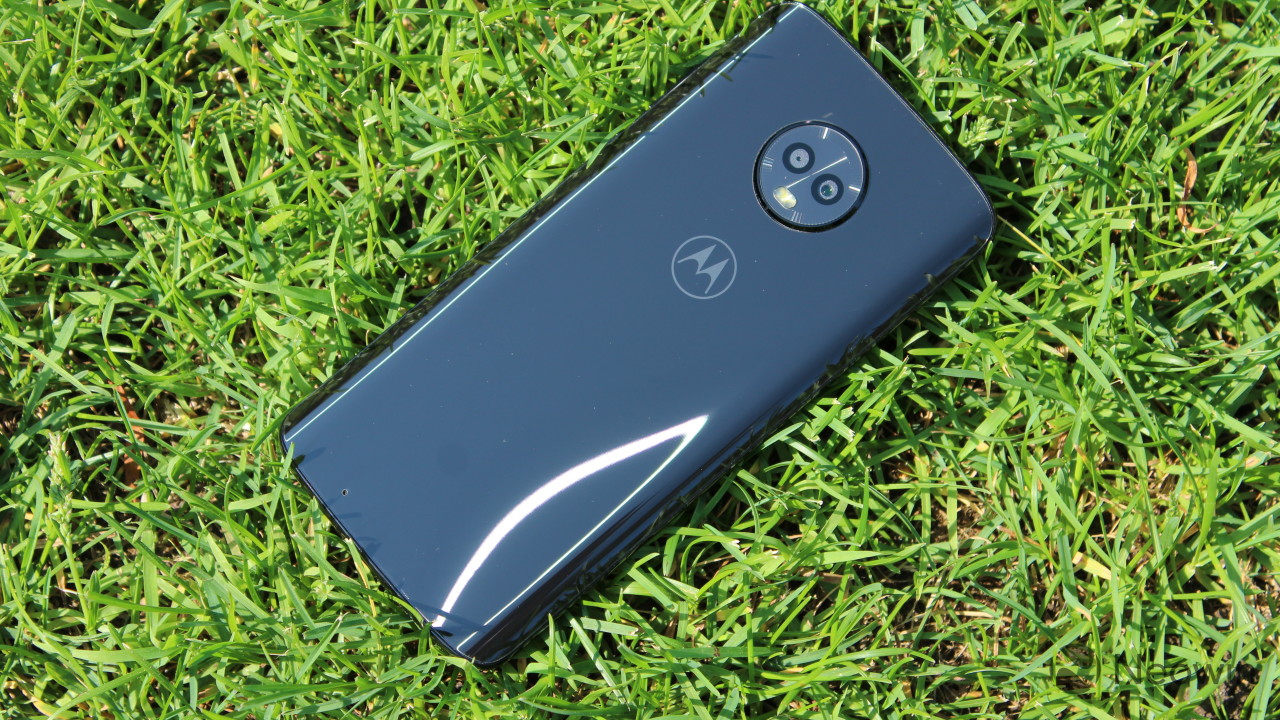 In general, the design is similar to that of the Moto X4. Aside from the glass back, it has the circular dual-lens camera module, and the curved edges. Indeed, the device does look sexy, and it's probably the best looking device that you'll find at the $249 price point. 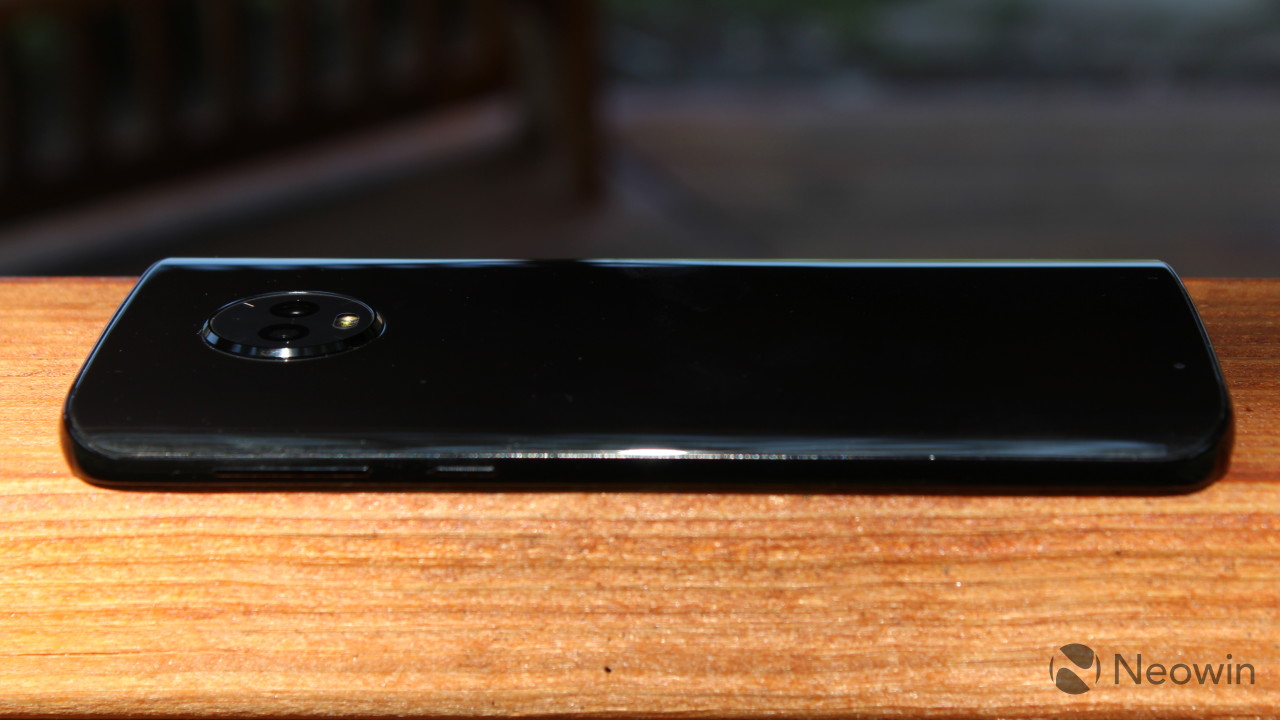 On the right side, there's a power button, and above that is the volume rocker. The bottom of the device is where you'll find the USB Type-C port for charging and the 3.5mm audio jack.

Unlike with the Moto G5, the glass back cover is not removable. That means that you won't be able to replace the battery, and you can insert a nano-SIM and a micro-SD card (it's the same slot) on the left side of the device. 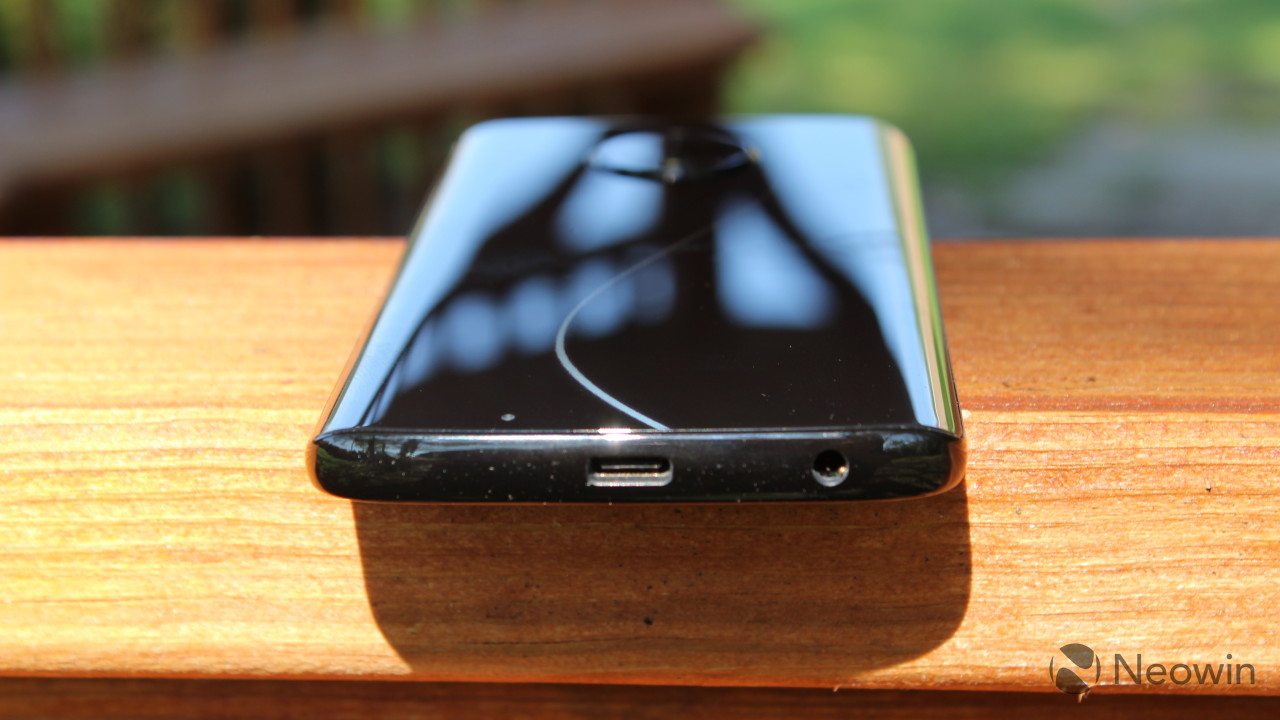 The fingerprint sensor is placed on the front below the display, which is different from other handsets recently introduced like the Moto E5 Plus and the Moto G6 Play. Those devices put the sensor on the back, and the reason that this one is on the front is for Motorola's one-button navigation, which is turned off by default.

The Moto G6 has a 5.7-inch 1080x2160 display. That means that it's among the first Motorola handsets to use an 18:9 aspect ratio, which is the current trend in smartphones. Unlike the current trend however, it does so without a notch at the top. 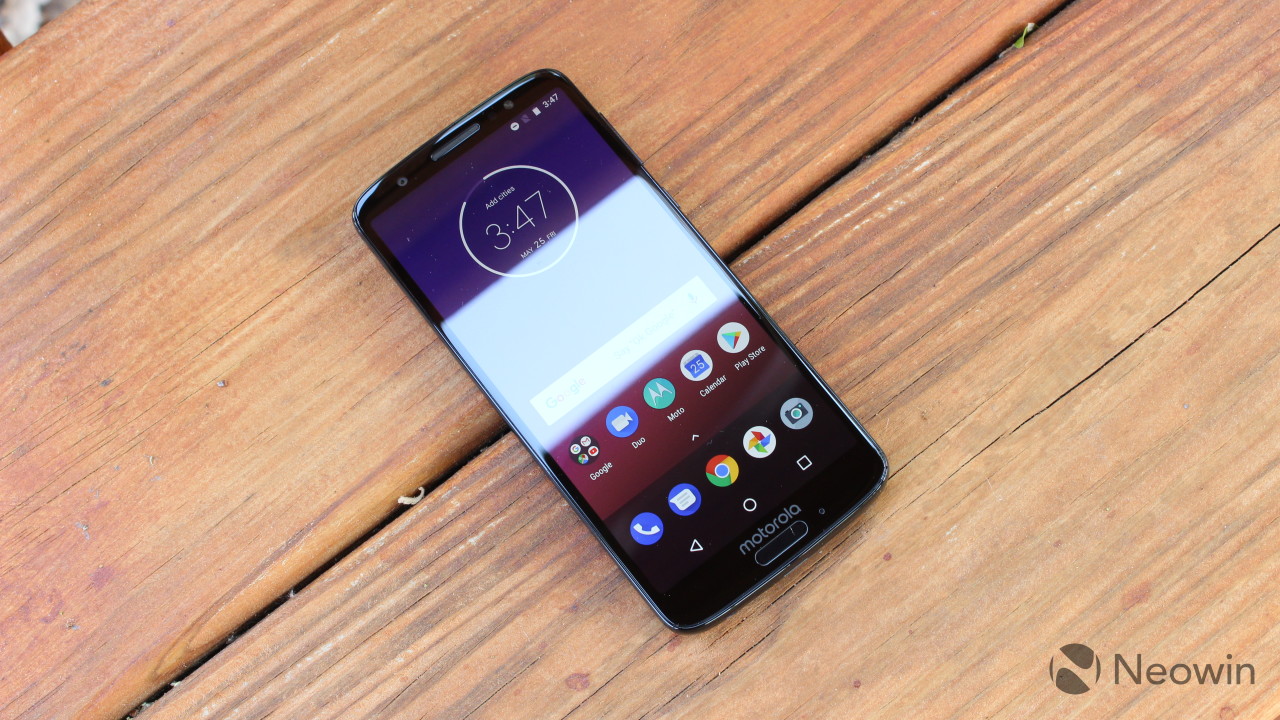 The 424ppi LCD doesn't show any pixelation, which is great for a device with this price, although it's becoming more common. Another thing that's nice is that I never had any trouble seeing the screen in direct sunlight. The auto brightness settings didn't require any adjustments.

While the side bezels are narrow, they're not too narrow. In other words, I wouldn't categorize this as "nearly bezel-less", which is a term that companies love to use a little too much. I like a little bit of bezel though. When bezels get too narrow, I'll end up touching the display when I don't mean to, or at least covering a piece of it when I'm trying to view the full screen. 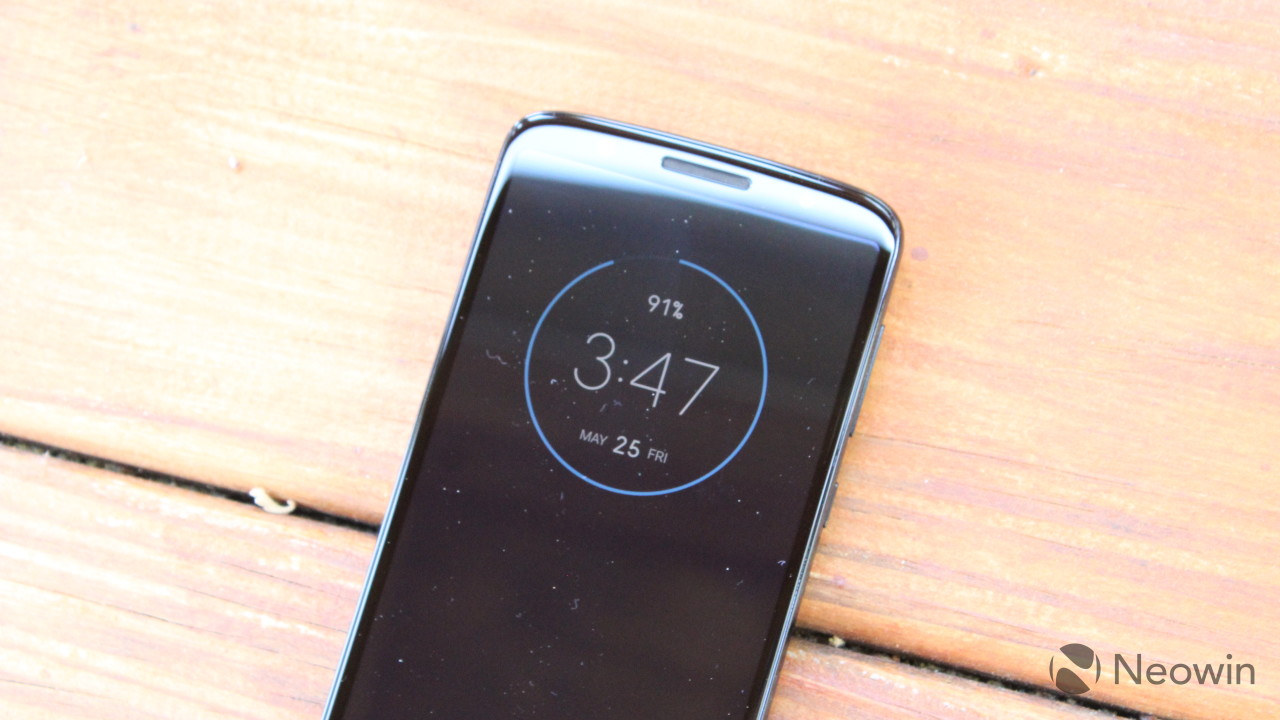 There's also an ambient display, which has been present in Moto phones for a few generations now. It goes on and off at regular intervals, and it will turn on when you pick up the phone. You can also see what apps have notifications waiting for you, and you can launch those apps right from the ambient display.

One-button navigation, and the fingerprint sensor 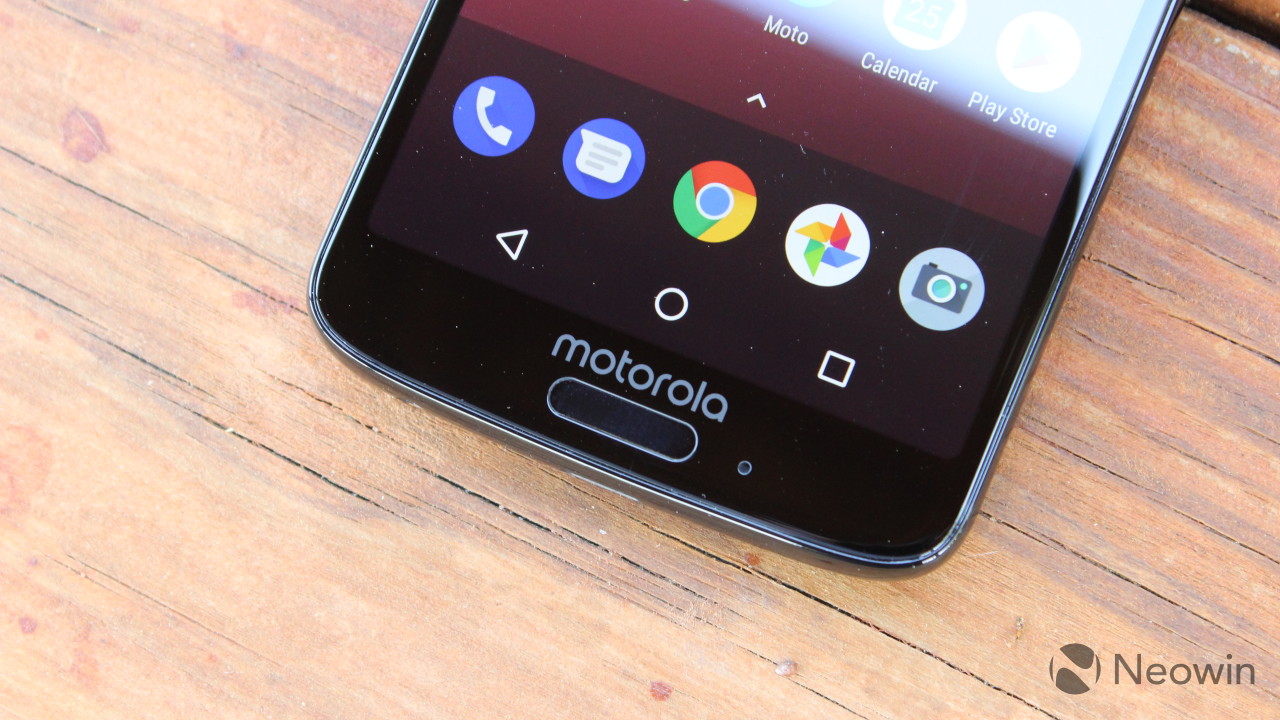 What's more interesting is one-button navigation, which removes the navigation buttons from the screen and allows you to control the device from just that button. Swiping right to left goes back, left to right opens multitasking, tapping the button goes home, and holding the button opens Assistant.

The only thing that I particularly don't like about one-button navigation is that this isn't a standard across devices. This is probably your only phone, so you'll be good. If you use other devices that offer such a feature, like Huawei's, you'll find that since they work differently, the muscle memory is hard to get down.

OK, so Moto never went anywhere. Moto is a set of features that pretty much makes your phone better. There are lots of useful things hidden in the Moto app, and what's cool is that it doesn't clutter up Settings.

What has made its glorious return though, is Moto Voice, which is still in beta. 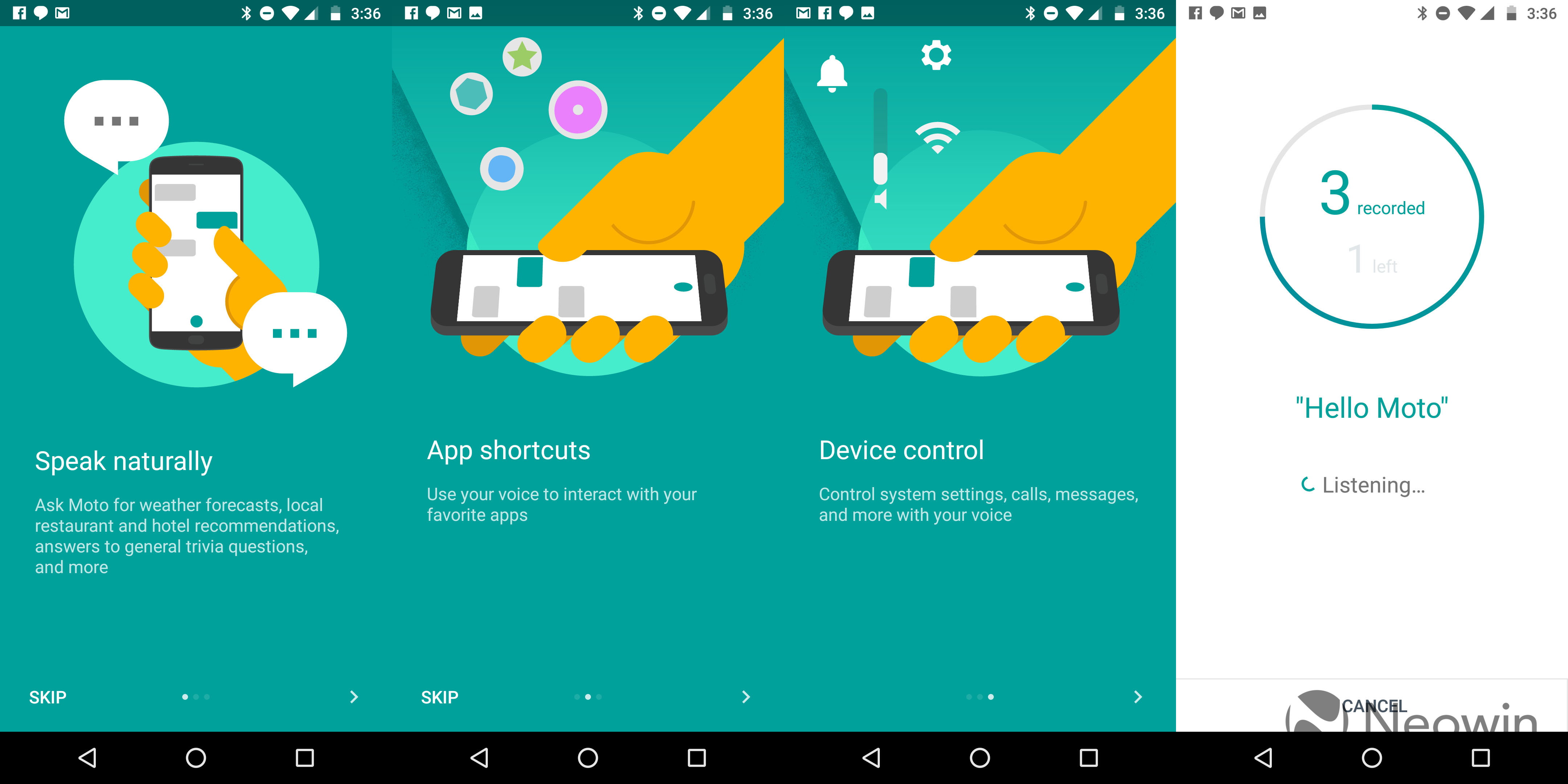 Moto Voice was a feature that was originally launched in the first Moto X. You'd be able to say things like, "OK Moto X, goodnight", and it would put the phone on do not disturb until the morning when you said, "Good morning". Eventually, the feature deteriorated down to what Motorola called "Show Me", as it just wasn't necessary anymore in the face of big name digital assistants like Google Assistant, Alexa, and Cortana. 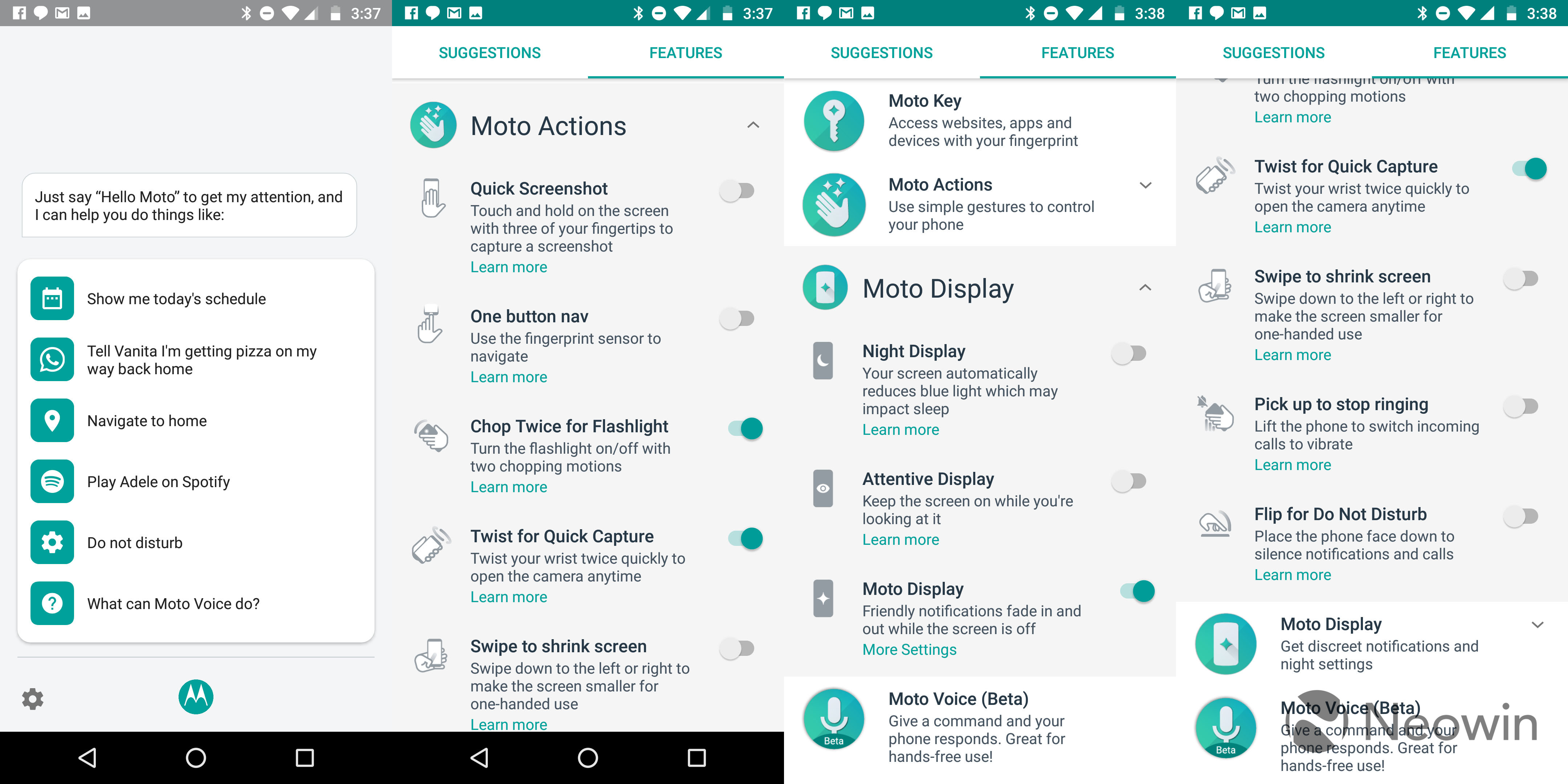 And then there are the rest of the Moto settings. This is where you can turn on one-button navigation, or the ambient display, along with a ton of other things. If you end up with a Moto G6, make sure to explore the Moto app, as it's packed with lots of cool features.

The Moto G6 has a dual-lens camera, which offers resolutions of 12 megapixels and five megapixels. As mentioned earlier, this is all about bringing features from higher end devices to a more affordable tier.

Being the first Moto G device with a dual-camera, it offers a depth effect, so that includes Motorola features like Selective Focus and Selective Black and White. When you take a photo with the depth effect on, you can adjust the background blur with a slider, and you can adjust this later in the Depth Editor. 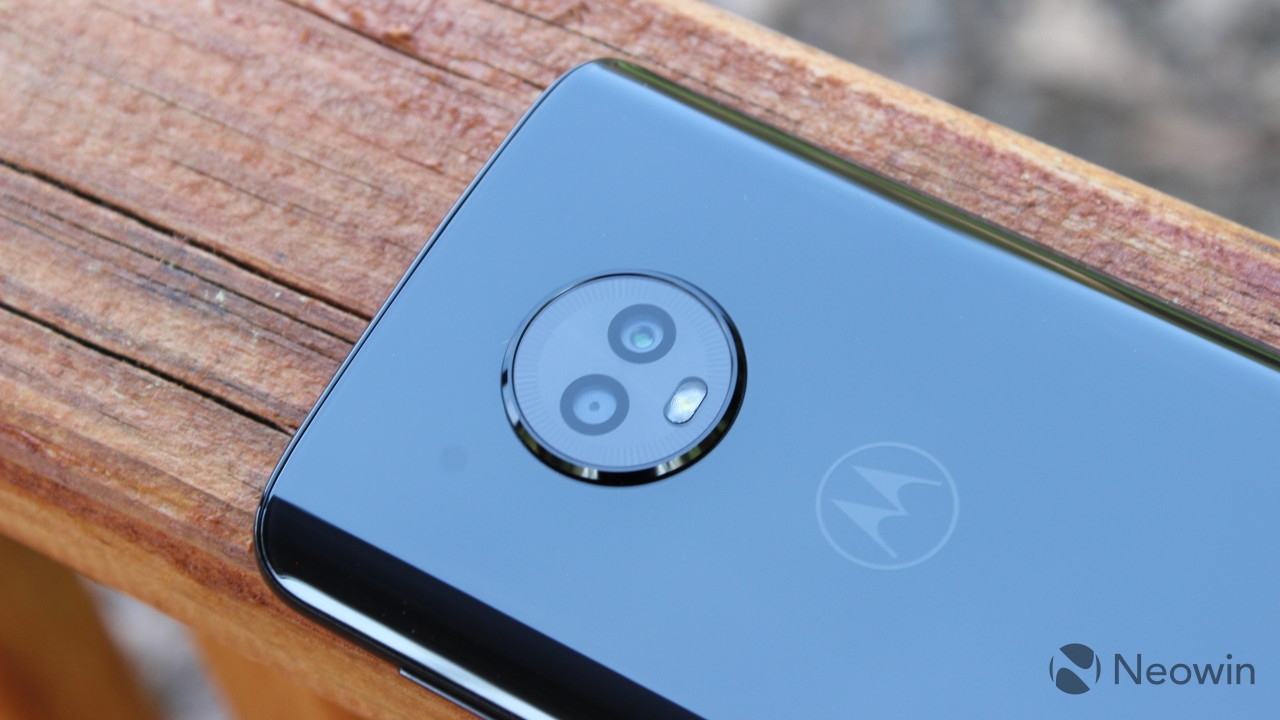 With the Depth Editor, you can also change the area that's in focus. This can actually come in handy, in case you accidentally focused on the wrong part of the image. And then there's Selective Black and White, which allows you to colorize only certain parts of the image and leave the rest in black and white.

While taking the picture, you can also use Spot Color to achieve a similar effect. All you'll have to do is tap on a color in the picture and the phone will do the rest. This also has a slider, and you can adjust just how much color is included in the image.

I also want to give a shout-out to the video recording capabilities of this device. It captures up to 1080p at 60fps, which is pretty rare in a device of this price point. Most other devices will go up to 1080p at 30fps.

You'll notice in the samples below that there are multiple copies of many of the images. That's because there are so many ways to take a picture with this phone. Some use the depth effect, some don't, some use it with the slider adjusted, and some use Spot Color. Check it out.

I really like the Spot Color feature. It's reminiscent of the Color Pops that you could do with the old Lumia Windows phones. One thing that I noticed is that when trying to use the feature at night, quite a bit of light is taken out of the image. Spot Color is definitely a daytime feature.

Ultimately, I think the camera is great, and it includes a lot of fun features.

The Moto G6 packs an octa-core Snapdragon 450 processor, with all eight cores being ARM Cortex-A53. That's not high end by any means, but I never struggled with it at all, and I didn't find that the device lags. Quite the contrary, in fact. If I wasn't told so ahead of time, I'd never have guessed that the device uses Qualcomm's lower mid-tier processor.

Historically, the Moto G series has used Snapdragon 4xx, except for the Moto G4, which had a Snapdragon 617. It would seem that if you want Qualcomm's upper mid-tier chips, you'll have to go for the Moto X series or the new Moto Z3 Play.

I also didn't have any trouble with getting battery life for an entire day, even with pretty frequent use. I guess this is the benefit of an all ARM Cortex-A53 chip. 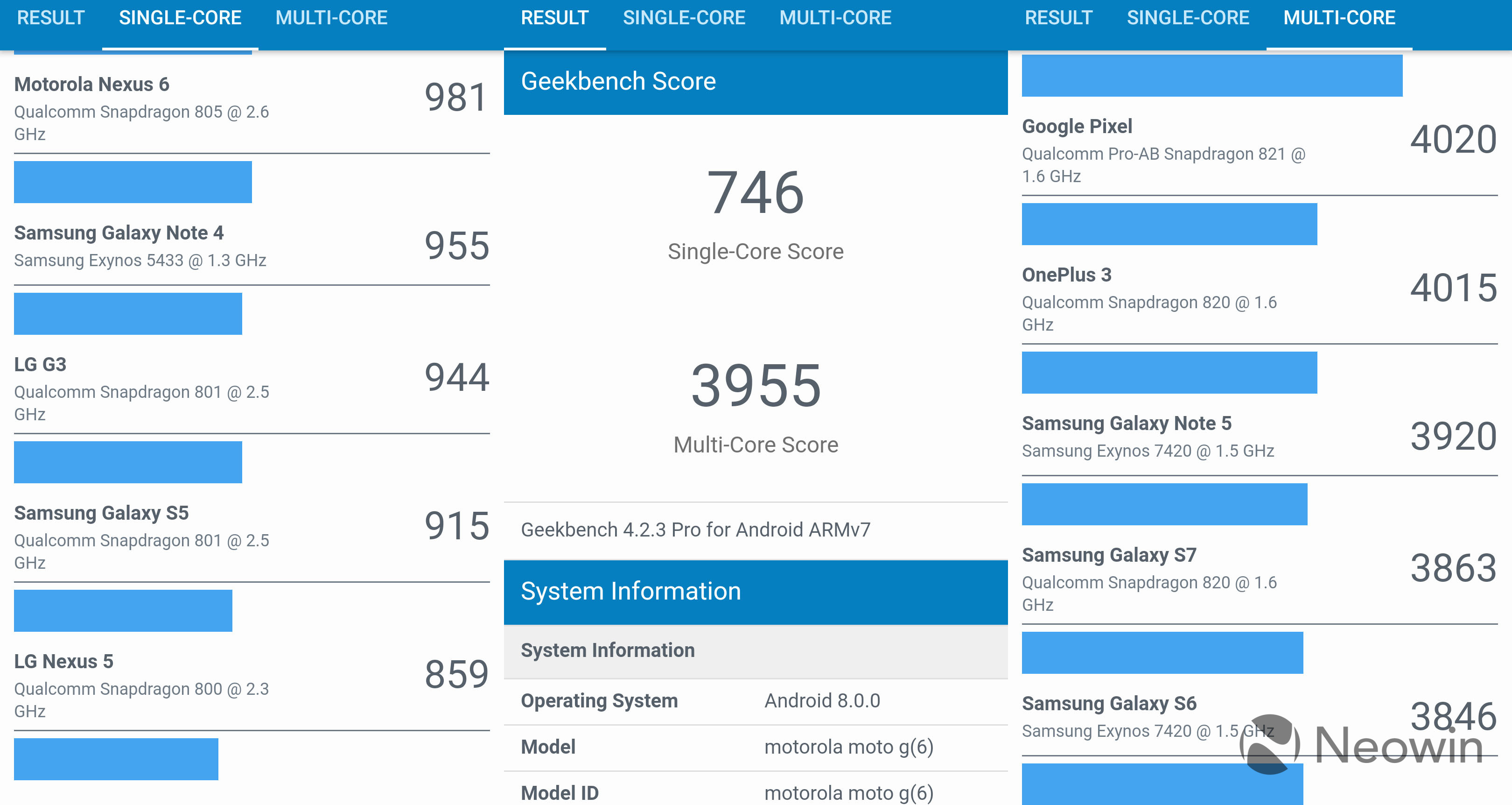 The multi-core score of the chip is impressive, as it's comparable to a Snapdragon 820, which was Qualcomm's flagship chip a couple of years ago. Single-core doesn't do quite as well, falling short of the Snapdragon 800. 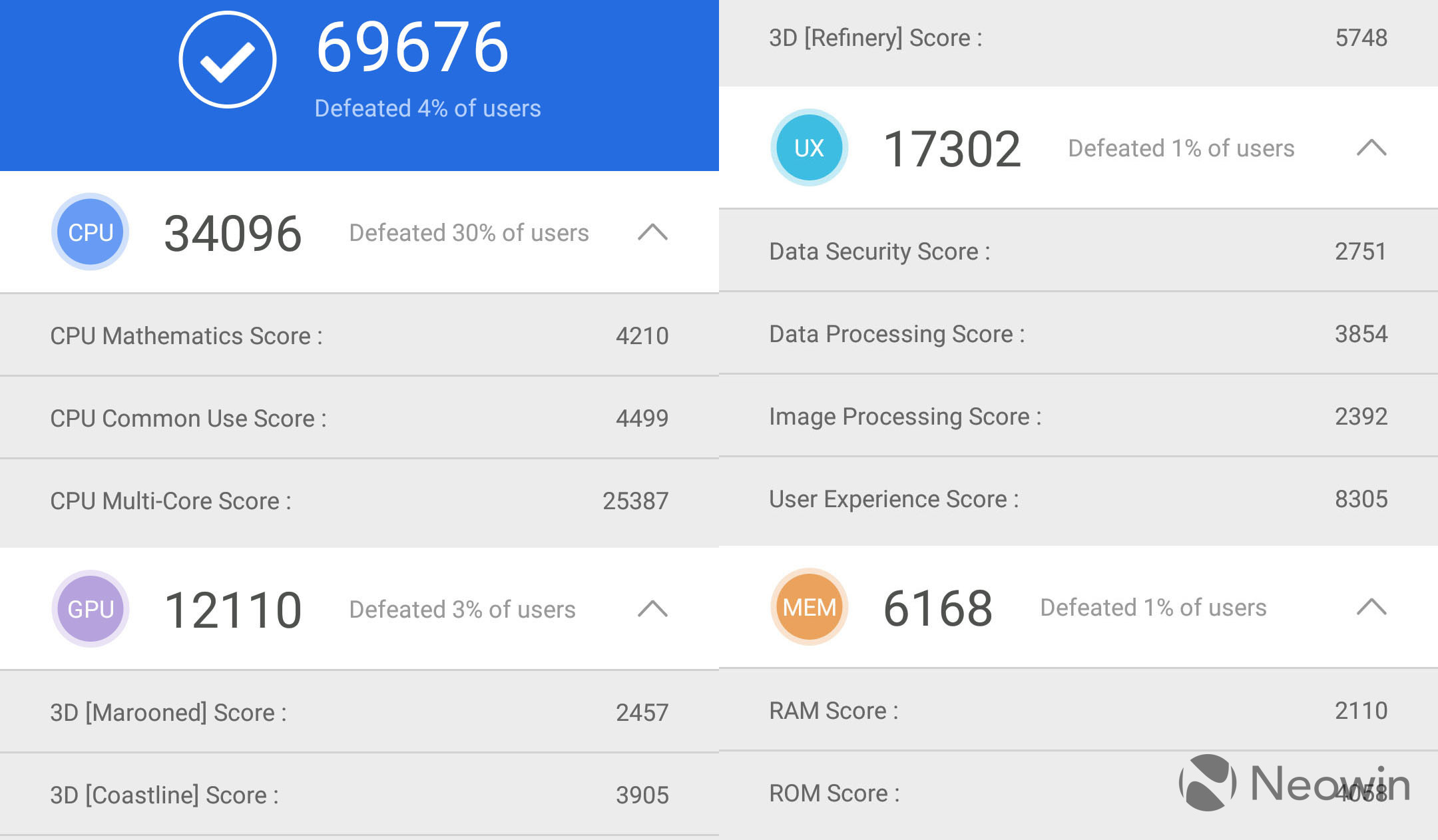 As you can see, the scores aren't entirely impressive, when compared with other devices. I wouldn't put too much stock into benchmarks though, because the real-world performance is great.

Obviously, if you're big on mobile games, you'll probably want something a little more high end. However, I did find that the average mobile game plays OK. Just watch out for high-end graphics.

Ever since Motorola was owned by Google (it's owned by Lenovo now), and the company launched the Moto X, G, and E lines, it's been great at delivering value. Indeed, the Moto G lineup has always been great, and it's always the device that I recommend to people looking to spend a couple of hundred dollars on a phone. 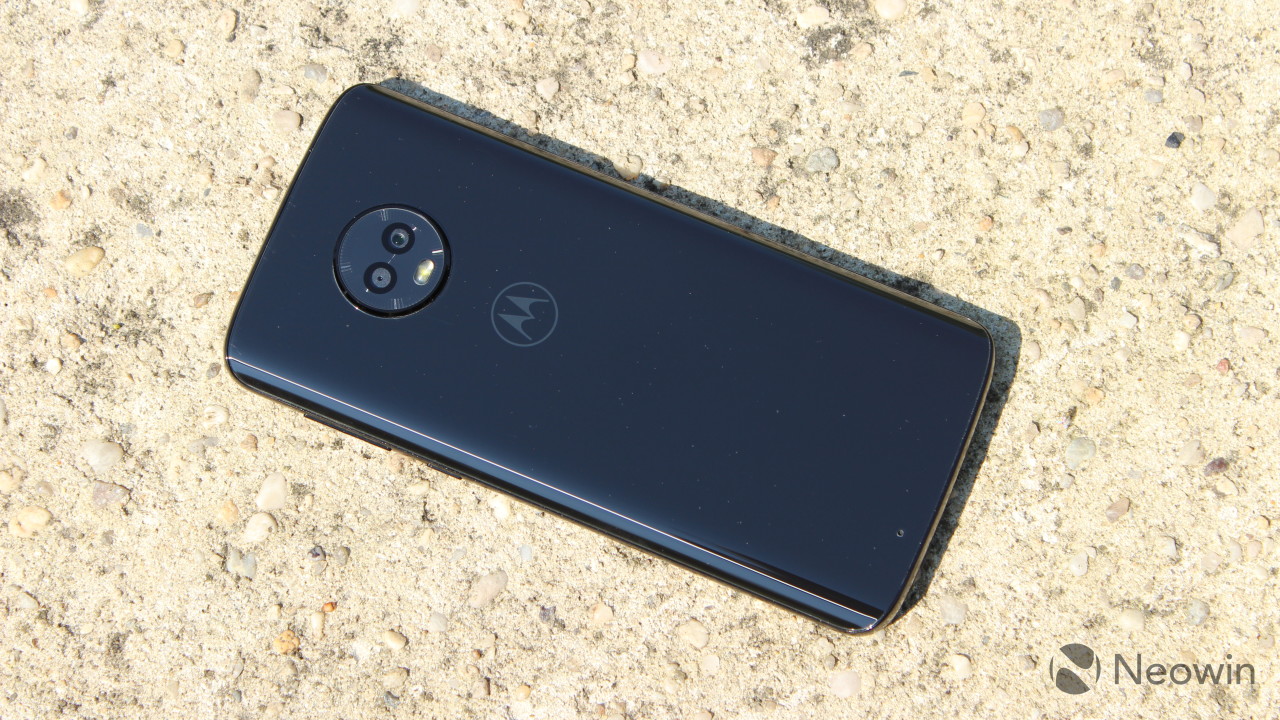 That does not change with the Moto G6. As usual, it's the best value that you can get for $249. The value market is becoming crowded and competitive too. Just look at the Honor 7X, which offers impressive specs for $199.

While I don't care for the decision to use a glass back if there's no wireless charging, the Moto G6 does look beautiful. And I really do love the camera features that Motorola's been using, as they're reminiscent of the old Lumia features. They're implemented well too, which can be quite rare.

The Moto G6 is an easy phone to recommend to anyone that's not willing to spend over $600 on a phone. It's a great smartphone, at a great price.