The chorus of slams against Apple for its recently launched iOS 6 Maps has been non-stop since the latest version of Apple's mobile OS was launched earlier this week. Nokia has already taken the time to show how its Nokia Maps software is, in their opinion, superior to both Google Maps and iOS 6 Maps. 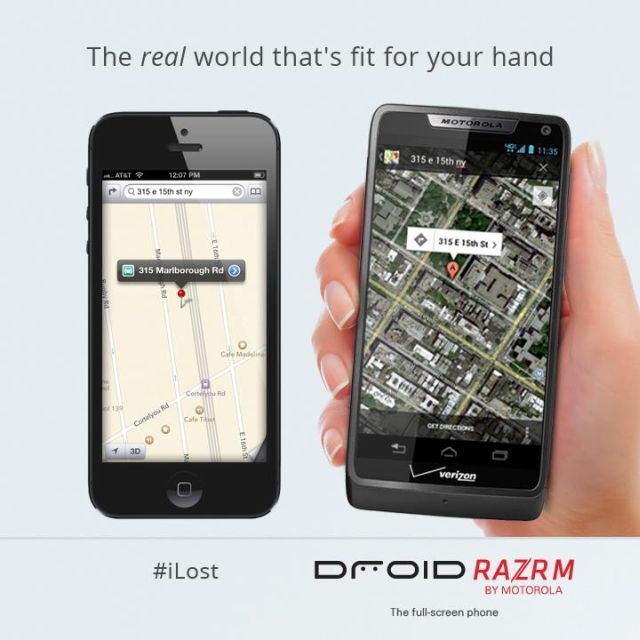 Now it's Google's turn, and it's using its Motorola smartphone subsidiary in its own attack against Apple's Map app. In a new post on the official Motorola Facebook page, it posts up an ad for the upcoming Droid Razr M smartphone and compares Google Maps to Apple's app on the iPhone 5.

The ad makes much of the fact that the data contained in Apple's Map app can be highly inaccurate. The Facebook post also contains the message, "Looking for 315 E 15th in Manhattan? Google Maps on DROID RAZR M will get you there & not #iLost in Brooklyn."

Of course, it must be said that Google Maps was the default map app in previous version of iOS and that Apple removed Google Maps for the iOS 6 launch. While there are rumors that Google is preparing its own iOS 6 map app, there's no confirmation and there's also no word if Apple would even allow Google Maps to reappear for iOS 6.