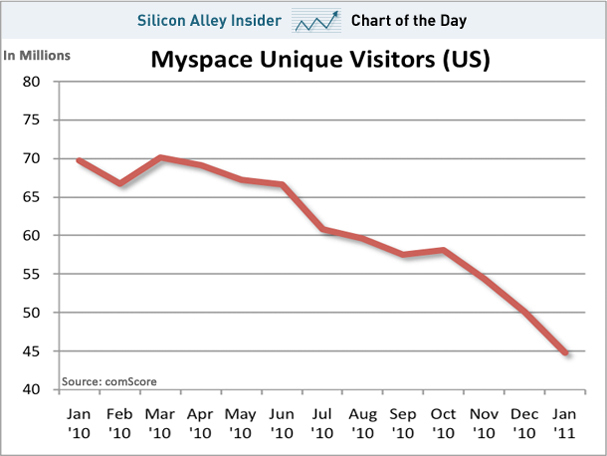 Despite announcing in a press conference last November that Myspace would start using Facebook Connect for users to quickly register and login through the social networking website; this hasn't done much to help the site which has continued to lose visitors on a massive scale, according to a report on Business Insider.

Myspace had 45 million unique visitors in January, down from from 70 million the same time last year, according to comScore data. This is probably why the site was put up for sale. As is apparent, its turnaround plan just didn't work.

What was a very embarrassing surrender for Myspace was hoped to bring some short-term life back into the site, while it continues its downward spiral. Even with the recent redesign to the website, a likely shutdown of the website seemed imminent to most, as News Corp continues to lose millions of dollars keeping the site alive.

COO Chase Carey admitted that "there's been a lot of interest" but News Corp will "consider all options" before making a move.

We’ll consider all options - not just a sale, it could be a sale, it could be an investor coming in to it, it could be us staying in with a restructured ownership structure with management. We think a fresh perspective would give them flexibility and an opportunity to get a new life consistent with the right-sizing of the product and the costs.

In previous discussions, Carey had told analysts that Myspace's redesign had been "well received" but "its full potential may best be achieved under a new owner."

The news came following January's layoffs, reducing staff by 47%. Estimates at the time placed the decline in users in the region of 15% since last November.