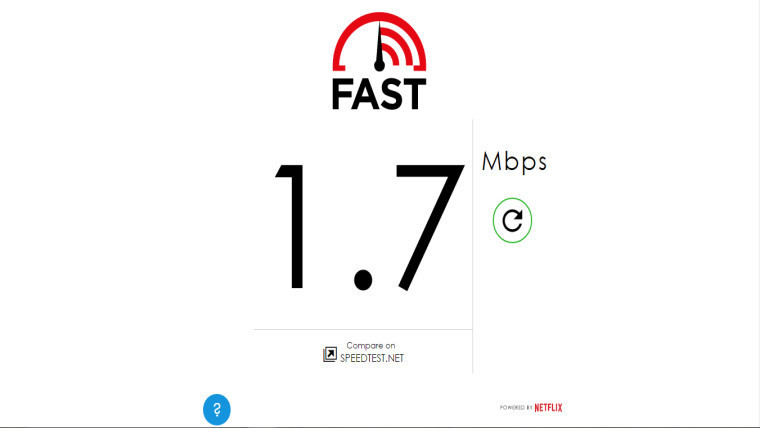 Netflix has announced the global launch of Fast.com, an elegantly simple, consumer-oriented website which tests the download speed of any home network in seconds.

The announcement, which was posted to Netflix's official blog, bills the website as a tool which enables consumers to exercise greater insight and control over their internet service - and internet users all over the world, regardless of ISP or Netflix subscription, can make use of it. According to Netflix's Vice President of Content Delivery Architecture David Fullagar:

We all want a faster, better Internet, yet Internet speeds vary greatly and can be affected by other users on your network or congestion with your Internet service provider. When you’re experiencing streaming issues, fast.com allows you to check the download speeds you’re getting from your Internet service provider. Using Netflix servers, fast.com works like other globally available tools including speedtest.net, and the results should be similar in most cases.

Fast.com immediately begins calculating your computer's download speed upon opening, and is typically finished within 10 seconds. The site allows you to compare this result to speedtest.net, which is generally the standard website used for internet service diagnostics on speed and ping. We ran three separate tests comparing the results of fast.com and speedtest.net, and found that the download speed results could differ each time between the two sites by anywhere between 0.5 and 1.0 Mbps, with speedtest.net generally displaying a faster download speed than fast.com.

Unlike speedtest.net, fast.com doesn't display ping or upload speed; according to the site, "fast.com is a simple-to-use way for consumers to estimate what speed their ISP is providing. It is not a network engineer's analysis and diagnostic suite."

The website, which works globally on any device including phones, laptops, and smart TVs, was created in part to allow consumers the information about services they pay for, and potentially empower them to challenge service providers if they're being overbilled. Netflix suggests if results from fast.com and other speed tests often show slower downloads speeds than you've paid for, you should ask your ISP about the results.