Samsung held their CES press conference today, announcing many new features and upgrades to a variety of its product lines. The most exciting upgrades take place with their television line. More than half of Samsung's new LED TVs support 3D resolutions, and are as thin as the width of a pencil. The new TVs feature a new design dubbed "Inspired by Nature" which sports a brushed metal finish or wood grain accents, four legged stands, and can also sense when a viewer nears the TV and exposes a control panel when approached. Live TV can also be viewed from the remote of several LED models. Traditional LCD TV's have also been upgraded to support 3D viewing. To ensure 3D content is available, Samsung has partnered with DreamWorks and Technicolor to produce 3D films. Monsters VS. Aliens will be the first 3D Bluray movie, and will be released later this year.

Samsung has also focused on application integration for their latest line of televisions. Similar to mobile applications, viewers can download programs tailored to their TV, including Netflix, Blockbuster, Picasa, Travel Channel, US Today, and Vudu. Samsung will also include new applications for their home theaters and other media equipment later on this year. The application framework will be open, and can be obtained by anyone as a downloadable SDK.

A new mp3 player, called the IceTouch, features a 2 inch transparent AMOLED display. Users can tap the screen on the backside without covering the front of the screen when selecting and listening to music.

In the arena of phones, Samsung has become the first to sport a fully functional mobile TV solution, using a single ATSC mobile tuner that is integrated in their newest line of phones. 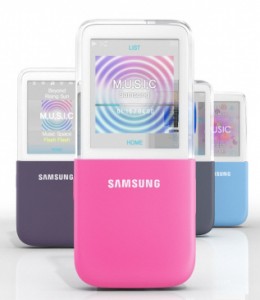