Microsoft released the preview version of Windows 8.1 on Wednesday and with that came a ton of other software preview launches. That also included two new beta versions of software that were made for IT professionals.

As announced today on the Microsoft Business blog, the company launched betas of User Experience Virtualization 2.0 and Application Virtualization 5.0 SP2. Both these new beta versions of UE-V and App-V support the preview of Windows 8.1 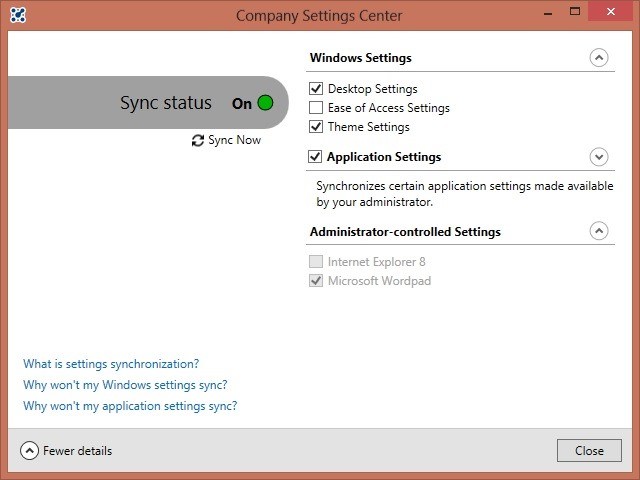 The UE-V 2.0 beta add support for Windows 8 and 8.1 apps so IT admins can personalize those apps across all devices. It also adds the new Company Settings Center, shown above, that lets users view, control and troubleshoot and app and OS settings that are under UE-V.

Microsoft also goes over what's been added to the beta version of App-V 5.0 SP2, saying that it "... gives IT pros the ability to deliver virtually any application, anywhere to users for a more flexible, integrated and powerful experience across virtualized applications."

Both the final versions of UE-V 2.0 and App-V 5.0 SP2 will be released later this year as part of a future version of the Microsoft Desktop Optimization Pack (MDOP).