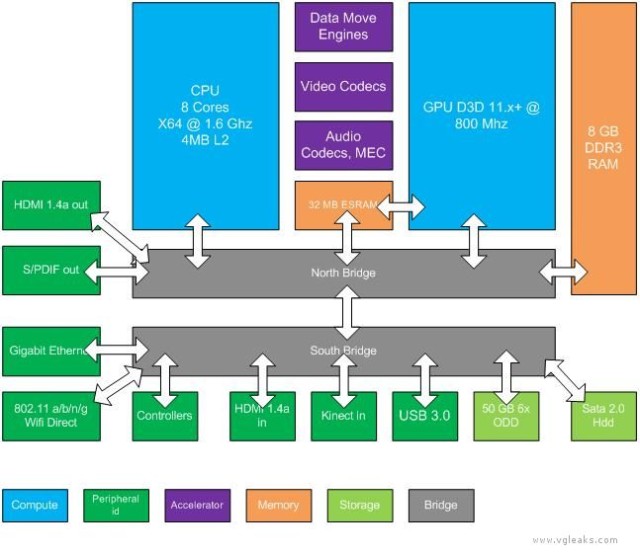 Get out the salt and put on your skeptical hat as next gen specs for Microsoft's follow-up to the Xbox 360 have reportedly leaked. While the source does not have a track record of a significant length, the source has been posting up incredibly detailed posts regarding the WiiU, next gen Xbox and the PS4.

It looks like, if true, Microsoft is putting some serious hardware under the hood to make sure its next gen console performs during its life-cycle as well as the Xbox 360 has.

The inclusion of a NUI sensor would make it seem that Kinect will be baked in at a deep level and we should expect to see the next generation of the device debut during the lifecycle of the platform.

Seeing as the sensor will be built in, and not an add-on, would make it appear that next gen gaming will also be able to take advantage of the platform since all end-users will have access to the necessary equipment. At the current time, Kinect gaming is limited in scope because publishers are not guaranteed that the install base they are selling to will have the needed attachment.

Not that it will be a surprise, but to see that Wi-Fi will be baked in this time around will appease many. When the Xbox 360 hit the store shelves, it required an adapter to be able to connect to wireless networks. The addition of gigabit networking is also a nice touch for those who want to stream photos and videos to the console.

Finally, the HDMI-in is a bit of a mystery as well. Could it be for set-top box functionality or does Microsoft have DVR functionality in mind? At this point, it's up for interpretation.

Microsoft is expected to unveil the next gen Xbox sometime in the first half of 2013. Some reports suggest a March timeline while others point to a June announcement.

Thanks for the tip Audioboxer!