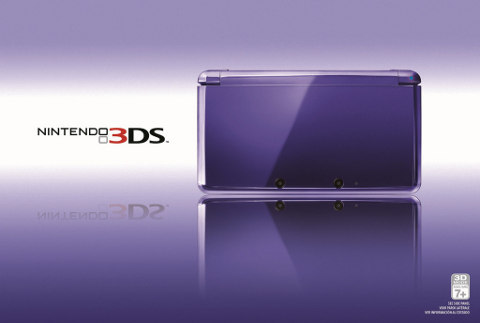 If you like the color purple (and we refer to the actual color, not the movie The Color Purple) and if you have also been holding out on buying a Nintendo 3DS, then you might have to shell out some money in a few weeks. Nintendo announced today that it will release a Midnight Purple version of the 3DS console in the US on May 20th.

This will be the fifth color choice for the Nintendo 3DS since its launch in early 2011; the others are Cosmo Black, Aqua Blue, Flame Red and Pearl Pink. The price of the new version will be the same as the others at $169.99.

The new purple 3DS also happens to be coming out on the same day as Nintendo's newest first-party 3DS game Mario Tennis Open. This latest Mario sports game will let the user control various classic Nintendo characters in arcade style tennis matches. The user can even play the game as their Mii avatar.

The Nintendo 3DS got off to a rocky start a year ago and forced Nintendo to lower its price drastically in August 2011. Nintendo recently announced it has sold 13.53 million units of the 3DS in its last fiscal year.