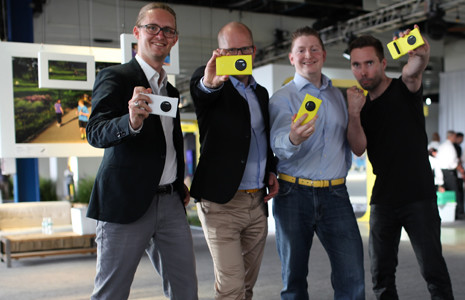 Nokia is currently scheduled to sell its smartphone business to Microsoft by the first quarter of 2014. That deal also includes Nokia's smartphone camera division, which in the past two years has been offering new leaps in smartphone camera hardware technology under the PureView brand name.

In a Q&A today on Nokia's official blog, Samuli Hänninen, the VP of software program management for Nokia’s Smart Devices business, is asked specifically what will happen to PureView after the team is transferred to Microsoft. He states:

PureView stands for the best imaging experiences on our devices and we will continue to innovate in this area. The Nokia Lumia 720 was a great example of us bringing a stunning camera to market with our widest aperture to date, but it didn’t carry the PureView name.  The most important thing is what we do, not what it is called, although we like PureView a lot.

The PureView name first came up in early 2012 when the company put in a 41-megapixel camera in the Symbian-based 808 PureView. It has since been used to identify the camera hardware inside several Lumia Windows Phone devices, including the Lumia 920 and most recently with the 41-megapixel Lumia 1020.

Hänninen stated in the same Q&A that Nokia's camera team still anticipates working with its longtime partner Zeiss even after the move to Microsoft. He added, "With combined resources and talent from Nokia and Microsoft, we’re excited about the cool things we will be able to build together in future."