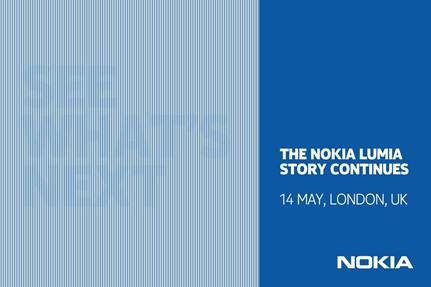 There's been a ton of rumors about what new smartphones Nokia will be releasing in the near future. Today, the company announced it will be holding a big press event May 14 in London that will likely raise the curtain, officially at least, on some of these future products.

TechnoBuffalo reports it and other members of the press have now received their official invites for the event, which will begin at 10 a.m. local time (5 a.m. Eastern time and 2 a.m. Pacific time). The invite indicates that it will concentrate on the Windows Phone-based Lumia lineup, so there won't be any new low-budget Asha smartphones announced at this press gathering.

The company could finally reveal the Nokia 928 at the press event, which is rumored to be the Verizon Wireless variant on the AT&T-exclusive Lumia 920. Nokia could also reveal "EOS," which has been rumored for months to have a high-megapixel PureView camera inside. Yet another phone that may be revealed May 14 is "Catwalk," the code name for a Lumia with a light aluminum case. Add it all up, and it sounds like May 14 will not only be a big day for Nokia but for Microsoft's Windows Phone platform as well