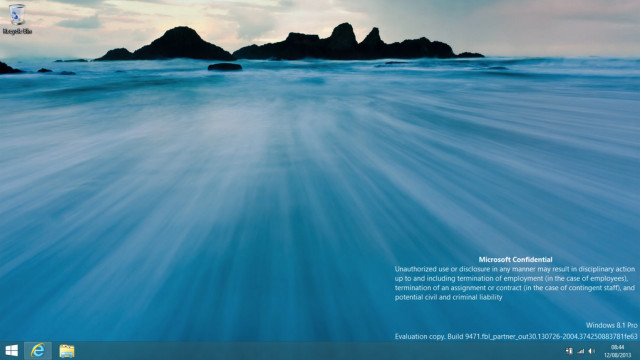 Over the past few weeks, we have seen two builds of Windows 8.1 leak that have come from the hands of OEMs. While we are all waiting for Windows 8.1 to hit RTM, which should occur next week, Neowin has been informed that OEMs will receive another test build this week.

While nothing is certain when it comes to leaked builds, the previous build, 9477, appears to have come from an OEM, which may mean that the build coming this week, could leak too. Also, seeing that RTM will be distributed to OEMs before the October release, that build could leak too via the same channels as the other OEM leaks.

While we don’t have a specific build number, the current leak, 9477, is an older build that was released to OEMs roughly three weeks ago. While we would not expect any new features to be present in these leaked builds, since they are so close to RTM, we should still see bug fixes and possible small visual alterations to tile colors and wallpaper additions too.

RTM is expected to occur for Windows 8.1 next week as this is the final week of internal testing for the platform. Unlike previous Windows releases, Microsoft will not make the bits available to developers via MSDN/Technet ahead of the general release.