We've already reported that the talk show host and media mogul Oprah Winfrey has named the Surface tablet from Microsoft as one of the products in her famous "Favorite Things" gift list for 2012. Her cable channel, the Oprah Winfrey Network, showed a special Favorite Things 2012 episode on Sunday night.

During the episode, Winfrey also made posts on her Twitter page, including one praising the Surface. It said, "Gotta say love that SURFACE! Have bought 12 already for Christmas gifts. #FavoriteThings." 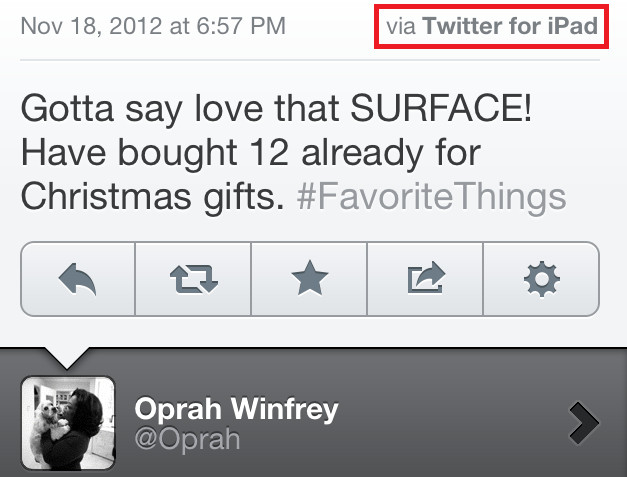 While the regular Twitter website does not show the source of Tweets, other Twitter clients do. One of them is the iPhone Tweetbot and, as reported by Zagg.com, it shows that the message was in fact written and posted via the Twitter app on Apple's iPad. Ouch.

To be fair, there isn't a first party Twitter app available yet for Windows RT, which is the OS in the current version of the Surface tablet. Twitter said it is working on one for Windows 8 (and presumably Windows RT as well) but it may be a few months before it is released. There are third party Twitter apps available to download from The Windows Store, but, as we reported last week, one of them, Tweetro, was pulled from the store after it hit Twitter's 100,000 user limit for third party apps.