Another significant app is set to join the Microsoft ecosystem soon, as PayPal has confirmed that its Here payment service will soon make its way to both Windows and Windows Phone.

PayPal Here launched in early 2012, with a triangular dongle that plugs into a phone's 3.5mm headphone jack, and which can read the magnetic strip on a credit or debit card. The dongle is free, and so is the accompanying app, but PayPal charges a fee of a few percent of each transaction that you perform.

In an official reply to someone who had reviewed the existing PayPal app on Windows Phone 8 - which is designed to manage consumer accounts only - the company said that it is "working on PayPal Here for Windows right now and would like to invite you to participate in a pilot program in January-February 2015." 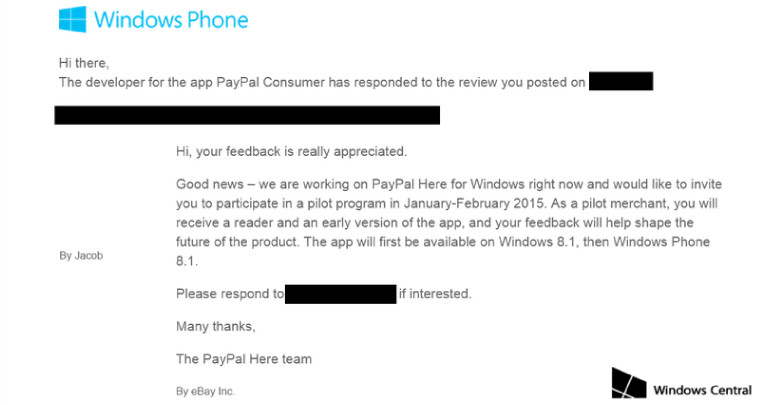 As Windows Central reports, the communiqué continues: "As a pilot merchant, you will receive a reader and an early version of the app, and your feedback will help shape the future of the product."

PayPal Here's chief competitor in the market is Square, which was set up in 2008 by co-founder and former CEO of Twitter, Jack Dorsey, and which uses a similar credit card reader dongle that plugs into a device's headphone jack. Back in 2012, Dorsey hinted that Square might be made available on Windows Phone if the platform managed to attract enough users, but the company has shown little interest in the OS since then.