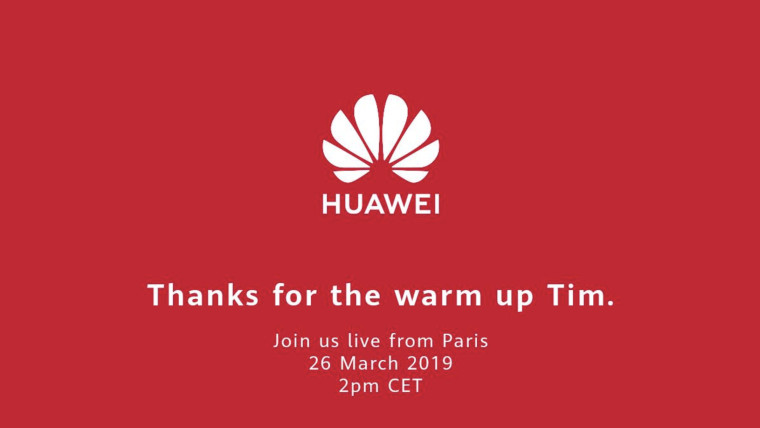 Tomorrow, Huawei will unveil its latest smartphones, the P30 and P30 Pro. Although we have seen plenty of both phones through leaks, there are still some things that have been left unanswered. While the live event will certainly be interesting, it seems that the firm is quite confident in what it will deliver, even going as far as throwing a small jab towards Apple's CEO Tim Cook.

The tweet comes from Huawei Ireland, who posted the image above, thanking Tim for the warm-up. Of course, this is in reference to Apple's own event which was held today that saw the unveiling of its new services like News+, Arcade, Apple TV+, and its own credit card. The Apple event wasn't the most entertaining in its history, so there is a good chance that Huawei's hardware event will be a bit more interesting.

Huawei has been throwing jabs to its competitors quite frequently recently, even going as far as trolling them in the physical space. While getting clever online is all well and good, it's reality isn't all the rosy. The firm has been involved in a long-standing battle with the United States government, which has resulted in retailers in the U.S. and other regions having to pull support for the firm's products.

The previously mentioned problems would be quite a bit on its own, but things went a step further with the company's CFO being arrested in Canada and facing extradition to the U.S. Naturally, Huawei has not taken this lying down, and has recently filed a lawsuit against U.S. government, with the current Chairman of the company demanding evidence of its transgressions and a proper solution.

Although the future of Huawei remains to be seen, for now, we can enjoy its releases in some form, by watching livestreams of products that will most likely never see the light of day in the United States and other regions. If you want to tune into the event, be sure to check out on YouTube at 14:00 CET, where you can be the judge on whether the company can deliver on its promises.