We've heard a bit about Oculus' Project Santa Cruz over the past couple of years. Facebook's goal was to provide users with a completely untethered and free experience in virtual reality, combining the capabilities of the Oculus Rift with the freedom of the Oculus Go which launched earlier this year.

Today, at the Connect 5 event, Mark Zuckerberg finally took the wraps off of the device, which now has an official name: Oculus Quest. The Quest is an "all-in-one" VR gaming system, and it's launching in the spring of next year, and it'll sell for $399, putting it in a very different category of the $199 Oculus Go. As we previously reported, the device will ship with Touch Controllers like the ones found on the Oculus Rift, and it features all of the necessary sensors in the headset itself, completely ditching the need for cables (aside from charging, of course).

To map the world around the user, the Quest uses four wide-angle sensors in each corner of the device, allowing it to track the user's position without the need for external sensors. It also features six degrees of freedom (6DoF), so that the user's movements can be recognized in any direction. As for visuals, the Quest uses the same screens as the Oculus Go, coming in at a resolution 1600 by 1440 per eye. Aside from that, not much is known about the device's internal specs.

Facebook is also working with partners to ensure that a large library of VR games is available to enjoy on the new headset, piggybacking on titles already available on the Rift. As part of those efforts, there will be over 50 titles available for the Quest at launch, including The Climb and Moss. 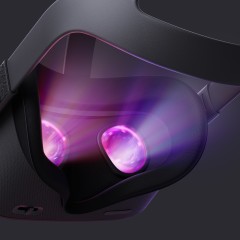 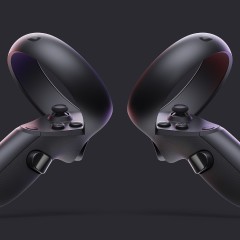 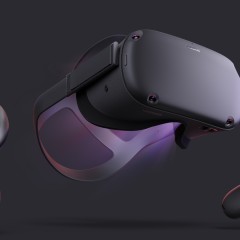